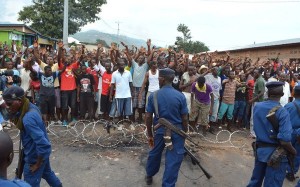 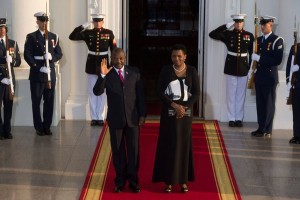 Michael Reynolds/epa/Corbis
Burundian President Pierre Nkurunziza and his wife, Denise Bucumi, attending an Africa Leaders Summit at the White House, Washington, DC, August 5, 2014[/caption] In many cases, the new austerity programs, intended to lead to more efficient government, instead encouraged unprecedented corruption. Those who managed to hold on to government and civil service jobs scrambled to grab whatever they could for themselves and their increasingly dependent extended families. This patronage system helped control dissent, as many African leaders used what Cameroonians term “the politics of the belly”—bribery—to compromise their critics and coopt opposition groups. But it also led to deteriorating public services, as I documented in Uganda, where the maternal mortality rate in the largest referral hospital had increased seven-fold since the days of Idi Amin, according to a World Bank consultant who had worked there in the 1970s. The continent’s foreign aid donors were not oblivious to these problems. They knew that this new loan regime, known as Structural Adjustment, would hurt huge numbers of people. For example, in a notorious 1981 World Bank report about the program , the authors acknowledge that some reforms would be resisted by “consumers and producers, parastatal managers, civil servants and industrialists,”—meaning just about everybody in the nations involved. The state had to be “willing to take strong action on internal problems,” the report continued. As Branch and Mampilly note, many African scholars interpreted this as tacit donor permission for repression in countries receiving loans. This would be consistent with the donors’ tendency to look the other way when Adjustment-friendly leaders—like Burkina Faso’s Compaoré, Cote D’Ivoire’s Félix Houphouët-Boigny, Uganda’s Museveni and Kenya’s Daniel Arap Moi—jailed, murdered, or exiled their critics. The donors’ tolerance for human rights abuses may help explain why, when ethnic discrimination and repression escalated into genocide, as it did in Rwanda and Burundi, the international community did nothing until it was far too late. Another reason so many African leaders feel they can afford to ignore their own people has to do with America’s “War on Terror.” During the 1990s, the Clinton administration began securing military ties with African leaders who seemed willing to cooperate in the fight against what Clinton officials saw as the rising threat of Islamic militancy on the continent. These ties have only grown in the years after September 11. According to journalist Nick Turse, the US military has sponsored more than one thousand African missions since 2011, with countries such as Nkurunziza’s Burundi, along with Rwanda, Ethiopia, Chad, and Uganda, deploying troops and guards across Africa and the Middle East at America’s behest. The primary purpose of this seems to be to monitor and prevent the emergence of terrorist groups in weak states. But it’s no coincidence that the US’s military allies in Africa have often used security forces against their own critics at home. As the events in Burundi suggest, providing support to ugly regimes may ultimately undermine the very stability we are supposedly seeking. Now, fed up with decades of lies, plunder and abuse, Africans across the continent are finally rising up to challenge these Western-backed thugs. Some have been inspired by protests elsewhere in the world; some are united in new ways by Facebook, Twitter, and chat programs. Foreign aid has also brought thousands of NGOs into Africa. Not all are effective, but their American and European employees and volunteers have, naively or not, exposed African people to liberal Western attitudes and ideals of human rights as never before. Branch and Mampilly lament that whereas past African protest movements had clear ideologies, like Independence, African Nationalism and Pan-Africanism, the only thing today’s protesters appear to want is the removal of the current leadership of their countries. But this lack of a grand objective may not be such a bad thing, as long as whoever takes over pursues a modest program of obeying the rule of law, eschewing corruption and respecting human rights. This is why this spring’s election in Nigeria, in which incumbent Goodluck Jonathan graciously conceded defeat, was so welcome. Some opposition supporters had threatened violence if it felt the election was rigged, but this proved unnecessary. Though Nigeria’s new leader, former General Muhammadu Buhari, behaved like a tyrant when he briefly ruled the country between 1983 and 1985, he also cracked down on corruption. For two years, Nigerians formed orderly lines at bus stops, the streets were clean, and politicians didn’t steal. Many Nigerians, exasperated with their supremely corrupt country, are hoping for a spell of modest probity, as long as Buhari honors his promise to respect human rights this time. If we’re seeing the dawn of a new movement, let’s forgive it for lacking a glamorous label. Right now, it’s the best hope this beleaguered continent has. *Source NYR.Adam Branch and Zachariah Mampilly’s Africa Uprising: Popular Protest and Political Change is published by Zed Books and distributed by the University of Chicago Press.]]>