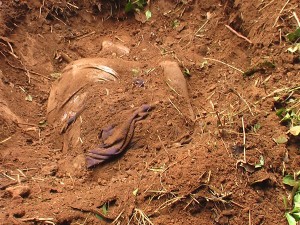 The Police in the Eastern region have arrested two persons in connection with the murder of two African American women there. The two were killed Tuesday night and buried in shallow graves at Akwamu Fie in the Eastern Region. Deputy Regional Commander ACP James Azumah Abass confirmed the arrests to JOYNEWS. He said the two are assisting with investigations whilst the police are searching for more suspects. “It has been confirmed that the African Americans were murdered and buried in a shallow grave. The police with the help of health authorities exhumed the bodies and they are now at Korle-Bu Teaching Hospital morgue,” the police commander stated. The Police in Akosombo Wednesday afternoon found the bodies of two African Americans killed after hours of searching. The victims had gone missing and a search in their room Tuesday afternoon revealed blood on the floor and a blood-stained cudgel, believed to have been used to hit them. The Acting president of the Akwamu Traditional Council dispatched over 70 people to complement a police search for the two missing persons. There were suspicions amongst residents that the two, a 75-year-old lady identified only as Mamlena and 69-year-old Nzinga were kidnapped and murdered. The two who are leaders of the African American community in Akwamu were recently accused by the Chieftaincy Minister, Dr. Seidu Danaa, of illegally acting as chiefs. They had been living in fear after threats on their lives and since a Ghanaian Osofo who lays claim to the stool (because he played a key role in its establishment of the community by the National House of Chiefs) forcibly moved to take over one of their houses. Their fears were heightened when their dogs were poisoned. Friends and relatives of the two didn’t see them Tuesday and all calls to them went unanswered. Alarmed, they broke into their room but found nobody except blood on the floor prompting fears they may have been kidnapped or harmed. Akosombo Divisional Commander, ACP Bosompem told Joy News a burial site had been found Wednesday morning and they were waiting for officials from the CID headquarters in Accra to help investigate. ACP Bosompem said they “suspect that something has been buried there,” and until the place is investigated “we don’t know what is in the ground there.” According to him, the site was found about 300 metres from the residence of the African Americans and plans are currently underway to exhume what is there. Private legal practitioner, Samson Lardy Anyenini late last year brought a suit on behalf of the leaders and against the Chieftaincy Minister whom they alleged had supported one Osofo to mistreat them using national security. The Osofo was named in the suit as claiming right to the symbolic stool and skin created by the national house of chiefs to reintegrate disaporians. Samson says that suit was withdrawn earlier this year after the Attorney-General (A-G) called for an amicable settlement. He said there was urgent need for protection for the people.