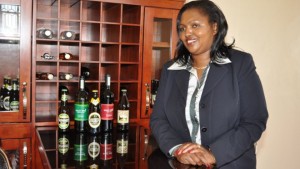 Tabitha Karanja and a range of her company’s drinks[/caption]

It was a thirst for success that saw Tabitha Karanja put herself in the role of a David taking on a Goliath.

The 50 year old is the founder and boss of the only large-scale brewery in Kenya actually owned by a Kenyan. Mrs Karanja, one of only a handful of female brewery owners across Africa, set up the business – Keroche Breweries – with her husband back in 1997. Initially making a fortified wine, the company has since moved into spirits and, from 2008, making beer. Its lager brand Summit is now so popular in the country that earlier this year Keroche opened a $29m (£19m) expansion at its brewery in the town of Naivasha, 90km (56 miles) north west of the capital Nairobi. It will enable Keroche to increase its production ten-fold, from 10 million litres of beer per year to 110 million litres. The success has come despite the presence of a Goliath that has towered over the Kenyan beer market for more than 90 years – East African Breweries (EAB), part of UK-headquartered, multinational drinks giant Diageo. EAB continues to brew eight out of every 10 beers sold in Kenya, led by its Tusker brand. Such has been EAB’s dominance that Mrs Karanja has faced a struggle finding distributors willing to sell her beer. She has also had to battle against big tax rises and copycat rivals. Yet Mrs Karanja says she is confident that the expansion will enable Keroche to increase its share of the Kenyan beer market from 5% to 20%, and increase its inroads into EAB’s part of the market.

Gap in the market

The first of 10 children born into a middle-class family, Mrs Karanja says she was lucky enough to have gone to one of the best schools in Kenya. After graduating she initially worked as a librarian, but she says she could not shake off the desire to start and run a business. 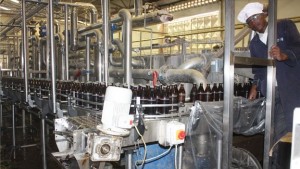 So after marrying her husband they co-ran a hardware store for seven years, but then she says she wanted to do something more interesting. “I got bored running the shop, and started looking for new opportunities in the world of business,” she says. Despite having no experience of the drinks industry, Mrs Karanja recognised a gap in the market – the fact that low income Kenyans struggled to afford to buy the beer and other alcoholic products of EAB and the other global firms, such as SAB Miller. Instead too many Kenyans were being injured or even killed by dangerous homemade brews. To solve this problem and hopefully establish a viable business, Mrs Karanja came up with the idea of making a fortified wine, which despite being low priced, would be made to high standards. So using their savings, Mrs Karanja and her husband set up Keroche, with her as chief executive and her husband as chairman. Employing staff with drinks industry experience, they initially took on five employees. And in a country used to all alcoholic drinks coming in glass bottles, they decided to use plastic bottles instead to keep the cost down. This however, did not initially go down well with consumers, when the fortified wine, called Viena, was released. Mrs Karanja says: “The initial days of the business were the toughest, getting people to trust our plastic packaged products was not easy, many people thought we were packaging some dangerous stuff that could knock out drinkers.” Keroche also faced a problem in getting Viena distributed, as most distributors wished to continue working solely for EAB. So instead Mrs Karanja had to set up her own network of agents.

Over the next five years sales slowly built up, but Ms Karanja says that the business was then hit by copycats, small producers setting up to make their own fortified wines sold in plastic bottles. She says that these wines were often unsafe, including some which stole the Viena name and pretended to be the real thing. As a result of health concerns, the Kenyan government substantially increased taxation on the new sector. So Keroche stopped making fortified wine and moved into beer, gin, vodka, and wine imported from South Africa, all sold in glass bottles. [caption id="attachment_17906" align="alignleft" width="300"] 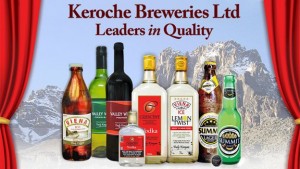 Keroche makes a range of products, which it sells via its own network of distributors[/caption] Today the business has a 20% share of the overall drinks market in Kenya, and 5% of beer sales. It employs 300 people, and its annual turnover is $63m. The continuing success of the company has seen Mrs Karanja win a number of pan-African business leader awards. And although Keroche’s products are currently only on sale in Kenya, she is now eyeing expansion into Uganda, Tanzania and Rwanda, and thanks her husband and all the staff for the business’s continuing success. She says: “I value and trust that my staff will always do their work the right way. “I allow everyone to perform their duties without breathing down their necks. However, I’m a hands on person who knows everything that goes on around here.” *Source BBC]]>