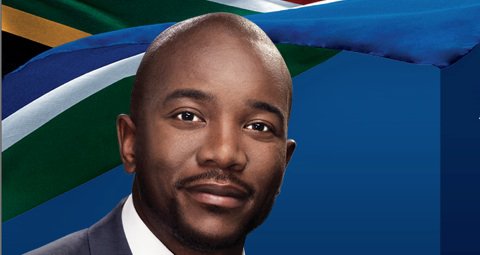 DA LEADER MMUSI MAIMANI. PHOTO©DA.ORG[/caption] A South African politician, as they say, “broke” the internet on Wednesday, after he took to answering questions on micro-blogging site, Twitter, with close to 100,000 tweets generated by the hash tag #AskMmusi. The newly elected leader of the opposition Democratic Alliance, Mmusi Maimane said he wanted to talk directly to the people and in the process set a new record number of tweets and for trending for hours this week. Following his victory last weekend as the first black leader of the historically white party, Maimane decided to host a “virtual town hall” debate via Twitter, asking people to tweet their questions to him. While some questions were genuine, Maimane faced some rather bizarre, interesting and at times funny questions. Questions included what his favourite soap opera is, to his favourite football team and his thoughts on American pop star, Beyoncé. With power shortages a reality for South Africans one tweet read: “The guy who presses the load shedding button, where does he live”? The race issue was also a popular question with one asking: “Why do white people refer to us as ‘you people?'” another one read: “Do you eat black jelly babies?” There were the more serious questions with tweets asking him about the state of politics in the country, education, and his vision for the party and the state of the economy. Questions included, “If you could serve in cabinet, excluding the presidency, which portfolio would you prefer and why?” “Twitter is the most direct way I can engage with South Africans, who I am accountable to,” Maimane explained his reason for taking to the social networking site. “It was also an opportunity to give South Africans my vision for South Africa and the DA. “I laughed a few times. “The only thing that prevented me from answering all the questions was the volume and time.” Speaking to a local newspaper, The Mercury, the DA’s communications director, Jamie Turkington, said they were happy with the Twitter response. “He wasn’t expecting such a response, but he is more familiar with Twitter than Facebook, so he was able to respond quite quickly to most of them,” he said. “We will be going through each tweet to see if there are issues that he may need to delve deeper into.” A day later #AskMmsui was still trending on social media and took seventh place in the top 20 United Kingdom trends as well. Maimane also gained more than 7,000 new followers after he displayed both his funny and more serious side in the one-hour engagement. *Source The Africa Report]]>