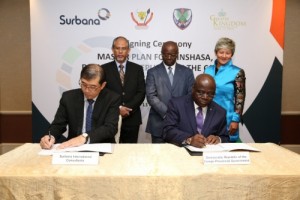 The signatories are Mr Pang Yee Ean, CEO, Surbana International Consultants and Mr Robert Luzolanu Mavema, Provincial Minister of the Plan, Budget, Public Works and Infrastrucure, Democratic Republic of the Congo. Witnesses are Mr Masagos Zulkifli, Minister in PMO and Second Minister for Home Affairs and Foreign Affairs, His Excellency Mr Andre Kimbuta, Governor of Kinshasa and Ms Elim Chew, Chairperson of Greater Kingdom Ltd.[/caption] Surbana International Consultants  was appointed today as the master planner for Kinshasa, the capital and largest city of the Democratic Republic of the Congo. Surbana will be providing a regional structure plan for Kinshasa Province (with a land area of over 9,900 km2 – approximately 14 times the size of Singapore) and a detailed master plan for Kinshasa City (2,500 km2 in size). This is Surbana’s largest masterplanning contract to date as well as its first in the Democratic Republic of the Congo. It is also Surbana’s ninth project in Africa, following earlier ones in Burundi, South Africa, Republic of Congo, Angola, Rwanda, Nigeria, Mauritius and Tanzania. Surbana secured the masterplanning contract through an international public tender and in collaboration with its partner Greater Kingdom Ltd (GK). The master plan aims to address complex urban conditions of the city owing to its size, population, environmental sustainability concerns, as well as other socio economic aspects such as housing and employment.  The master plan will take 14 months to complete and an additional six months to assist the Kinshasa Provincial Government in building up their institutional capacity building to plan and manage the urban development. As part of the contractual agreement, Surbana will be setting up a local project office in Kinshasa. Speaking at the contract signing ceremony with the Kinshasa Provincial Government, Pang Yee Ean, CEO of Surbana, said, “We are delighted to secure this job with the Democratic Republic of the Congo. This is Surbana’s largest masterplanning project and ninth in Africa to-date. We are glad that Surbana is becoming recognised as the masterplanning and urbanisation consultant of choice in the African continent. Our track record of delivering quality and workable master plans which enable cities to grow economically and socially, is paying dividends as more and more African countries approach us to help them with their urbanisation plans.  We are committed to delivering a master plan that meets the city’s unique social, economic and cultural aspirations in the next few decades.” The signing ceremony was witnessed by Mr Masagos Zulkifli, Minister in Prime Minister’s Office, and Second Minister for Home Affairs and Foreign Affairs. Mr Masagos said, “Sub-Saharan Africa has been among the world’s fastest-growing region over the last decade with an average annual growth rate of more than 5%, due in part to improved governance and economic reforms. This rapid development has created many opportunities in Africa’s infrastructure and planning sector, which Singapore companies specialising in urban solutions, housing and infrastructure development should explore.   We are glad that Surbana and the Kinshasa provincial government will be working closely together on the Kinshasa masterplanning project. Surbana is a good example of a Singapore company making strong inroads into Africa. Its success is a result of strong partnerships with the local African companies, as well as its growing track record for masterplanning and urbanisation projects.  We hope that this will pave the way for more Singa pore companies to explore the business opportunities in Sub-Saharan Africa.” Kinshasa is the capital and the largest city of the Democratic Republic of the Congo (DRC). It is located on the Congo River. [caption id="attachment_18258" align="alignright" width="500"] 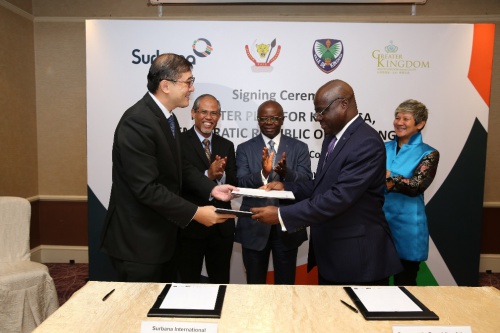 he signatories are Mr Pang Yee Ean, CEO, Surbana International Consultants and Mr Robert Luzolanu Mavema, Provincial Minister of the Plan, Budget, Public Works and Infrastrucure, Democratic Republic of the Congo. Witnesses are Mr Masagos Zulkifli, Minister in PMO and Second Minister for Home Affairs and Foreign Affairs, His Excellency Mr Andre Kimbuta, Governor of Kinshasa and Ms Elim Chew, Chairperson of Greater Kingdom Ltd.[/caption] Once a site of fishing villages, Kinshasa is now an urban area with a population of over 9 million. It faces the capital of the neighbouring Republic of Congo, Brazzaville, which can be seen in the distance across the wide Congo River. The city of Kinshasa is also one of the DRC’s 11 provinces. Because the administrative boundaries of the city-province cover a vast area, over 90% of the city-province’s land is rural in nature, and the urban area occupies a relatively small section in the far western end of the city-province. Kinshasa is the third largest urban area in Africa after Cairo and Lagos. It is also the second largest “francophone” urban area in the world after Paris. If current demographic trends continue, Kinshasa should surpass Paris in population around 2020. Surbana International Consultants  is a leading urban solutions consultancy. A Singapore, Temasek-Linked company and award winning urban solutions consultant, our clients value and trust us to meet their development needs. Our expertise is backed by over 50 years’ experience building more than a million homes across 26 townships and shaping the urban landscape in Singapore – one of the world’s top 10 best cities recognised for urban sustainability. From masterplanning to engineering, architecture design, project management, land reclamation, coastal engineering, underground engineering & city management, Surbana’s expertise cuts across many sectors – real estate, aviation, healthcare, infrastructure. Our multi-disciplinary team of experts knows what it takes to provide urban solutions in Asia, Africa and the Middle East. We have completed projects in 90 cities in 30 countries over the last 10 years. Today, Surbana employs 2,200 employees in 14 cities across Asia, Africa and the Middle East. *APO]]>