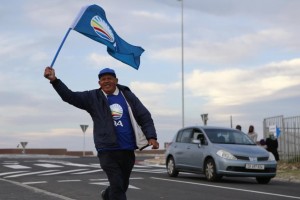 “This congress is a turning point, not only for the DA but also for South Africa,” the party’s outgoing leader of eight years, Helen Zille, said in her farewell speech.

All eyes are on Mmusi Maimane, 34, the party’s parliamentary leader, who is tipped to succeed her in a vote by 1,425 delegates on Sunday.

Maimane, raised in the township of Soweto — heartland of the anti-apartheid struggle — joined the DA only in 2009.

In 2014 he was elected as the party leader in parliament, with Zille’s backing and has on several times locked horns with the ruling African National Congress (ANC) lawmakers, including President Jacob Zuma.

In 2014 unsuccessfully ran for position of premier of Gauteng province, South Africa’s economic hub which includes the city of Johannesburg.

The Sunday vote is expected to be a duel between him and Maimane and Wilmot James, a 61-year-old mixed-race party veteran who is current the party’s chairman.

“The DA new leadership to be elected tomorrow can count on every ounce of my support,” said Zille.

The charismatic former journalist and anti-apartheid activist has not endorsed any candidate to succeed her.

“This congress marks a new chapter for South Africa,” she said, predicting the party would be in government in the forseeable future.

“As we head towards net year’s local government elections, an then onto 2019, we must remain unified and unwavering….and, if we stick to the plan, the DA will form the backbone of a new national government in the foreseeable future.”

During her speech, supporters held up blue and white posters marked “Thank You Helen Zille” as images from various stages of her political career were displayed on a big screen behind the stage.

Delegates lauded her for growing the party’s base in the last eight years at the helm.

“Under her leadership, the DA has become the most diverse party in South Africa…the DA is better off than it was before,” said Patricia de Lille, mayor of Cape Town, which is governed by the party.

Under Zille the DA made inroads in areas long dominated by the ANC, and is looking to grow its support in the next local government elections in 2016.

The DA boosted its share of the vote from 16.6 percent in 2009 to 22.2 percent in 2014 elections, but still struggles to present itself as a credible alternative to the ANC, which has ruled since the formal end of apartheid in 1994.

“We lived from election to election, pursuing our vision and implementing our strategies. That is how we grew from a party of 338,000 votes in 1994, to over 4 million last year,” she stated.

The DA has its roots in the now defunct Progressive Party, co-founded by the late anti-apartheid activist Helen Suzman in 1959.