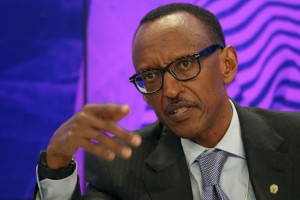 The possibility of Kagame, 57, running for an extra term with the backing of the ruling Rwandan Patriotic Front bears similarities to the political situation in two of Rwanda’s neighbors. In Burundi, the ruling party’s nomination of Pierre Nkurunziza to seek a third term in June elections has sparked more than a week of violent protests. Four people died in Thursday’s unrest, including one person killed by a grenade, raising the death toll since protests began to at least 17, Agence France-Presse reported.

Rwanda, a nation of about 12 million people, has seen economic growth averaging 7.8 percent over the past decade as it recovered from a genocide that saw as many as 800,000 ethnic Tutsis and moderate Hutus killed in three months of attacks by Hutu militias in 1994. Starbucks Corp. this week said it plans to double its purchases of Rwandan coffee, while Kigali-based brewer Bralirwa SA is a unit of Amsterdam-based Heineken NV. The nation sold $400 million of Eurobonds for the first time in April 2013. Neighboring Democratic Republic of Congo saw demonstrations in January when lawmakers sought to change laws that would have delayed elections and extended President Joseph Kabila’s 14-year rule. Parliament eventually approved a revised law that allows the 2016 vote to take place as planned. The African Union on Thursday said holding elections in Burundi would be impossible in the current environment. In an interview with CCTV Africa, AU Commission Chairwoman Nkosazana Dlamini-Zuma said the country’s constitution is clear that “really there shouldn’t be a third term.” The continental body can’t send election observers until there is peace, she said. Burundi’s Constitutional Court has cleared the way for Nkurunziza to run for a final time. “There are important differences with Burundi and the DRC -– most notably the fact that the RPF can very easily change the constitution with relatively little opposition from political parties or civil society,” Conradie said. *Source Bloomberg]]>