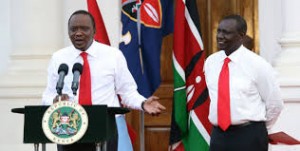 Bomet, Kenya – President Uhuru Kenyatta has expressed his confidence in Deputy President William Ruto and said those wishing to see squabbles between the top Jubilee leaders will be disappointed.

The President said he was more than satisfied with the Deputy President’s performance as well as how closely they working together. President Kenyatta cautioned some Jubilee leaders who have developed a penchant for engaging in controversy to stop disrupting the Government’s development agenda.

“I am very happy with how we work closely with the Deputy President. But for some people, if there is no political conflict, they are not satisfied. Tell them there is a new generation of leaders whose approach is different,” he said. The President, who spoke at Bomet Stadium, said those wishing for rifts within the Jubilee Government and constantly trying to create false narratives should realise that they are engaging in futile errands.

“Respect leadership and do not disrupt our agenda by using every opportunity to oppose development for the people. We will not be able to achieve our development objectives if we do not unite,” he said.

The President said the Government needs unity to achieve its development goals and those who cause disruptions were working against its success.

The Deputy President, on his part, said he was contented with the position he holds in Government and also ruled out any possibility of rifts ever developing between him and the President.

“When you voted for us, did you send me to fight with the President like what used to happen in the coalition government which was created through force. We are not fools to form a Government and then start fighting each other instead of working for the people,” he said.

He said those who are creating controversies within Jubilee with the hope that they might get some higher leadership positions should learn to be patient. “If you do not have the patience to be led then you do not have what it takes to lead,” he said.

The Deputy President said those opposing the Jubilee agenda should know that they are swimming against the tide. “If you have doubt, the writing is on the wall for you,” he said.

The President said the Government has made tremendous achievements and promised that more will be achieved in the coming years.

He said the Government was finalizing connecting electricity to all schools to improve the standard of education. The President said more than 70 percent of mothers deliver in hospitals after the Government scrapped maternity fees.

He added that every county will soon have one hospital equipped to the level of a referral hospital, a project being funded by the national Government. President Kenyatta criticised Jubilee leaders who opposed the hospitals project, saying that they were not honest.

“We are going to upgrade and equip Longisa Hospital at a cost of Sh500 million and somebody wants to stand in the way of such a project,” said the President. See also: Uhuru calls for dialogue, says Burundi unrest threat to stability More than 30 MPs, three governors including Bomet governor Isaac Ruto attended the meeting.

The meeting was also attended by several former Cabinet Ministers including Nicholas Biwott. Biwott, who addressed the meeting after a demand by the public, called on Rift Valley politicians to respect and stand behind the Deputy President. More than Sh14 million was raised for Africa Gospel Church with President Kenyatta contributing Sh5 million and the Deputy President contributing Sh2 million.