The move is an important step in Panalpina’s continued strategic expansion in growth economies, in particular in the Middle East and Africa

Switzerland-based supply chain solutions provider Panalpina  (PWTN:SW) is to acquire its Egyptian agent Afifi, a highly respected family-owned company specializing in freight forwarding, customs clearance and logistics. The move is an important step in Panalpina’s continued strategic expansion in growth economies, in particular in the Middle East and Africa. Afifi has been Panalpina’s agent in Egypt for the last 20 years. “Egypt has a lot of potential for us,” says Peter Triebel, Panalpina’s regional CEO for the Middle East, Africa and CIS. “By uniting with our long-standing partner Afifi, we will increase our foothold in this attractive market and lay a strong foundation for growth. Afifi has a solid customer base in Egypt, as well as a strong track record and reputation in local customs brokerage and projects work.” Since 1995 Panalpina has counted on Afifi as its agent in Egypt for ocean freight, air freight and projects services. “After 20 years of successful cooperation, we are excited to become a full member of the Panalpina family and part of a truly global network,” says Mohamed Afifi, Jr., designated managing director for Panalpina in Egypt. “The acquisition will not only allow us to substantially increase business in our home market but also across borders, as we will now be able to offer true end-to-end solutions to our international customers.” Afifi was established in 1936 in Cairo by Mohamed Afifi, Sr., and today employs around 150 staff in offices in Cairo, Alexandria and Suez / Sokhna. It also operates in Port Said East and West through a long-term subcontractor. Afifi will be fully integrated into Panalpina. The two companies reached a respective agreement on May 28, 2015, under which Panalpina will acquire 100 percent of Afifi, subject to conditions. [caption id="attachment_18432" align="alignright" width="300"] 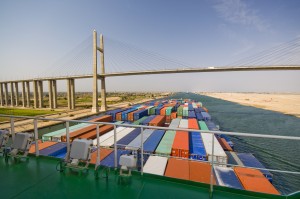 A container ship passes under the Suez Canal Bridge. Panalpina is set to acquire its Egyptian agent Afifi, a family-owned company specializing in freight forwarding, customs clearance and logistics:[/caption] Panalpina’s push in Egypt marks the latest milestone in the company’s strategic expansion in emerging economies. “Egypt has a large population and a sizeable middle class, in addition to being the regional base for numerous international companies,” Triebel explains. “Now political reforms are under way to strengthen the economy and improve the investment climate. Add a freight forwarding market that is very fragmented, and we have ample opportunity for growth.” While all major industries are represented in the country, Panalpina sees the greatest growth potential in the oil and gas, capital projects, telecom, automotive and healthcare sectors. The government has stepped up efforts to encourage the exploration of oil and gas, in particular in the Nile delta. Egypt, with a population of almost 90 million people, is the largest non-OPEC oil producer in Africa and the second-largest dry natural gas producer on the continent. Egypt also plans to build an international industrial and logistics hub near the Suez Canal in conjunction with the current scheme to dig a second canal that will facilitate two-way traffic of larger ships. The Afifi Group consists of three companies: Afifi Air Cargo, Afifi World Transport and Afifi Logistics International. Afifi Logistics International was established in 1936 by Mohamed Afifi, Sr., in Cairo. Afifi Air Cargo and Afifi World Transport were established in 1989 by Youssef Greiss, and in 1995 by Abdel Aal Aly, respectively. Afifi’s core activities are ocean freight and air freight. It is also specialized in projects logistics, mainly for oil and gas customers, and customs brokerage. *APO]]>