Abidjan, Côte d’Ivoire, May 18, 2015 – The African Development Bank (AfDB), in partnership with the Climate Investment Funds (CIF) and the Government of Mali, has launched the Renewable Energy in Africa: Mali Country Profile. The publication, released on May 7, highlights the country’s current inroads in renewable energy as well as opportunities for scaling-up the sector. The profile is the first in a series for Africa. The report highlights a myriad of possibilities in bridging the country’s electrification gap, which stands at a 55 and 15 percent electrification rate for the urban and rural populations respectively. Among them are opportunities to develop the country’s solar, hydro, biomass, and wind resources, which are currently underutilized. For example, with seven to ten hours of sunlight per day year-round, Mali has the capacity to be one of the largest solar-producing nations in the world, while only 250 MW of a potential 1 GW of energy has been developed from harnessing the power of the Niger and Senegal Rivers. 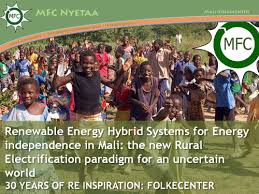 Mali’s positive track record in developing its energy sector, evidenced by its introduction of various renewable energy technologies as well as its efforts to create a welcoming enabling environment, are also discussed in the report. According to Ismael Touré, National Director of Energy, “Current development in the sector remains slow, but the Government of Mali aims to increase the share of renewable energy in the national electricity mix to 25% alongside a target for rural electrification of 61% by 2033. We are therefore continuing to work with our partners to make responsible investment in the sector more attractive.” During the launch of the report, Florence Richard, AfDB Climate Change Specialist, said, “The future is promising for the development of the renewable energy sector in Mali. It will help reduce the country’s vulnerability to fossil imports and increase energy access for those who need it most.” The Mali Country Profile draws upon the CIF/AfDB -sponsored Scaling-Up Renewable Energy Program in Low Income Countries (SREP) Investment Plan for Mali. *AFDB    ]]>