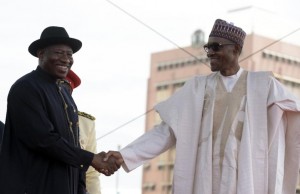 Former Nigerian president Goodluck Jonathan (left) shakes hands with his successor Mohammadu Buhari after handing over power during a ceremony at Eagles Square in Abuja, on May 29, 2015 (AFP Photo/Pius Utomi Ekpei)[/caption] Are expectations too high for President Buhari? Will the center hold for the coalition cobbled by the new ruling APC, will the PDP survive now that it is in the opposition? These and more are questions one of Nigeria’s seasoned Journalist Chido Onumah discussed with PAV as Buhari takes over political leadership in Nigeria. Onumah opines that Nigerians may be looking up to Buhari more than the APC and that putting Nigeria back on track will take more than just an election. To the surprise of many, elections in Nigeria went hitch free, especially low incidence of violence and maturity from the main candidates, has Nigeria turned a pivotal corner in its journey to genuine to democracy? I wouldn’t say the elections went hitch free. There were many cases of violence and deaths across the country before, during and after the elections. I think there was a high sense of foreboding and expectation concerning the level of violence which didn’t materialize so it is understandable in that sense to say the elections were hitch free. Nigeria dodged a bullet and in that sense we can say the elections went hitch free. There were manifest irregularities on a scale perhaps never witnessed in the annals of elections in Nigeria. And both parties, the People’s Democratic Party (PDP) and the All Progressives Congress (APC) are guilty in this regard. In my view, both parties rigged in places where the balance of forces was in their favour. But to address your question directly, I think Nigeria hasn’t really turned the corner with regard to credible election. There are two points we can highlight. One is the obvious deficiency of the election umpire, the Independent National Electoral Commission (INEC) which had four years from the last election in 2011 to prepare for these elections and it did such a shoddy job. And of course the broader issue of why every election in Nigeria seems to be a referendum on the survival of the country. I think there are lessons to be learnt about the last elections in Nigeria. The question is whether Nigerians are ready to learn those lessons. It’s a major challenge for the Buhari administration. It was going to be an uphill task for Jonathan to get victory in the face of challenges he faced and the security mess created by Boko Haram. Do you think the unprecedented move he took in conceding and congratulating Buhari is what will remain his legacy? The legacy of the Jonathan administration will largely be that of corruption and ineptitude. The jury is still out on the level of economic and financial devastation created by the Goodluck Jonathan administration. Having said that, it is important to stress that it has been the nature of governance in Nigeria. The Obasanjo administration witnessed mindboggling corruption. It appears successive governments in Nigeria have to outdo one another in this regard. Of course, it is important to stress that President Jonathan conceding defeat and congratulating the president-elect will place him in good reckoning in the international community, particularly coming from a continent that is used to sit-tight rulers. But President Jonathan had very little choice. He was a victim of his own misrule and once the mood of the country had turned against him it was going to be difficult for him to summon the moral courage to continue. Clearly, he could have decided not to concede and contest the outcome of the election and I’m sure there were those within his inner cabinet who may have pushed him in this direction for purely personal and partisan reasons. But the outcome would have been disastrous for him and even the country as a whole. As I mentioned earlier, he had fallen out of favour with Nigerians across the country and there were those who were ready to use the national mood against Jonathan to cause mayhem if Jonathan was declared the winner of the election whether genuinely or otherwise Following the bashing it suffered, the PDP will be enjoying opposition status for the first time. Will the party remain a force to reckon with in Nigerian politics, considering there are accusations flying already on who betrayed the President and why the call for the Chair of the party to resign? [caption id="attachment_18390" align="alignright" width="237"] 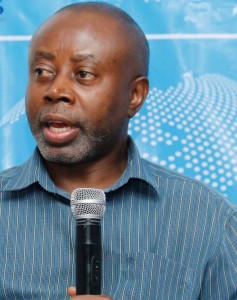 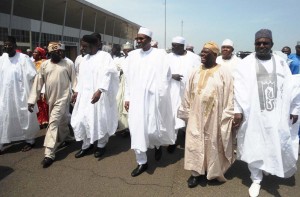 PIC. 16. FROM LEFT: APC CHIEFTAIN, SEN. BOLA TINUBU; GOV. MURTALA
NYAKO OF ADAMAWA; RETIRED GEN. MUHAMMADU BUHARI; APC CHAIRMAN, CHIEF
BISI AKANDE AND RETIRED GEN. BUBA MARWA, AT THE YOLA INTERNATIONAL
AIRPORT, DURING THE VISIT OF APC NATIONAL EXECUTIVES TO YOLA ON FRIDAY
(1/11/13).[/caption] There are too many egos and ambitions at play here: we have Bola Tinubu, the national leader of the party who some say still nurses the ambition of being president of Nigeria someday, Atiku Abubakar, the former vice president, who sees an opening if Buhari is out of the picture. There is the former governor of Kwara State, Senator Bukola Saraki, who aspires to be the next senate president. Saraki is fiercely ambitious and he would do anything to achieve his ambition. Then there are other young and influential politicians from the North of Nigeria who rode on the back of the Buhari bandwagon to emerge as governors and senators, the likes of Nasir El Rufai, the immediate past Speaker of the House of Representatives, Aminu Tambuwal, and former governor of Kano State, Rabiu Kwankwaso who I think feel a sense of entitlement as far as the presidency of Nigeria is concerned. Of course, there are some fringe personalities in the party like the out-going governor of Rivers State, Rotimi Amaechi, and the only APC governor in the south-east of the country, Rochas Okorocha who want to remain relevant. The leadership of the APC is already jittery not to lose control of National Assembly with the jostling for who controls the principal offices of the Assembly. It will be interesting to see how all this plays out. As Buhari braces up to assume office on May 29, how do Nigerians use the gains of the elections to keep the country on track? What future do you see for the country? Unless certain things are done and urgently too, the future will remain very bleak. We can’t get the Nigerian state to work when the Nigerian nation itself is not working. That for me is the fundamental question. As far as the progress of Nigeria is concerned, I think we are putting the cart before the horse. There are too many things that can throw the country into anarchy or perhaps another civil war and we need to address those issues. You can’t continue to run a country the way Nigeria is being run and hope that it will survive. There is an existential confidence in Nigeria that is lacking amongst those who call themselves Nigerians. Nigeria has a very shaky foundation. That is what is of utmost concern to me. Until we reconstruct the foundation to permanently resolve the issue of citizenship, the very idea of Nigeria as a nation remains a fiction. *Onumah is a Nigerian journalist and author of Time to Reclaim Nigeria and Nigeria is Negotiable. He is currently a doctoral candidate in communication and journalism at Universitat Autònoma de Barcelona – UAB Barcelona, Spain.]]>