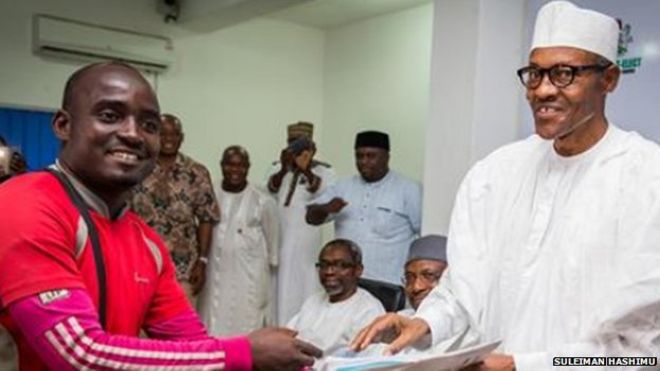 Suleiman Hashimu walked 750km (460 miles) and wore out six pairs of shoes over 18 days in order to see the inauguration of Nigeria’s new president.

His trek caught the public imagination and when he completed his trek, he actually got an invitation to meet Muhammadu Buhari before he was sworn in on Friday. Two years ago, Mr Hashimu was talking with a group of friends about what they would do if Mr Buhari, a former military leader, won the 2015 presidential election. One owned a shop and said he would let people take whatever they wanted, free of charge, but Mr Hashimu did not have much money to give away. “I made a promise that if Gen Buhari should win the election I would trek from Lagos to Abuja – so it started as this joke!” he says. When Mr Buhari was declared the winner on 1 April 2015 – becoming the first opposition candidate to win a presidential election in Nigeria – Mr Hashimu’s friends called him, reminding him of his promise. That same day Mr Hashimu left his home in Ibadan, where he was working in the construction industry, and travelled to Lagos. The next morning he began his long walk. He decided to walk for 12 hours each day and soon realised the scale of the task he had set himself. But news of his journey quickly spread and he was greeted warmly at each village he entered. “The journey took me 18 days but after I started I only walked three days alone. The other 15 days I walked with people. Most of the young people I met told me that I’m not the only one who loves Buhari and they volunteered to walk me to the next town,” he says. The excitement generated by his trek lifted his spirits. “People from all over the world called me. People shared my number on social media so people from the UK and US would be calling me, encouraging me, giving me confidence to walk. Those following me to the next town also gave me encouragement so I was so happy, so happy. “People started coming up to me and telling me about their problems. ‘We have insecurity in our community, we don’t have enough land to farm.’ All different complaints. Some people said they need water and others that they need light. [caption id="attachment_18465" align="alignright" width="624"] 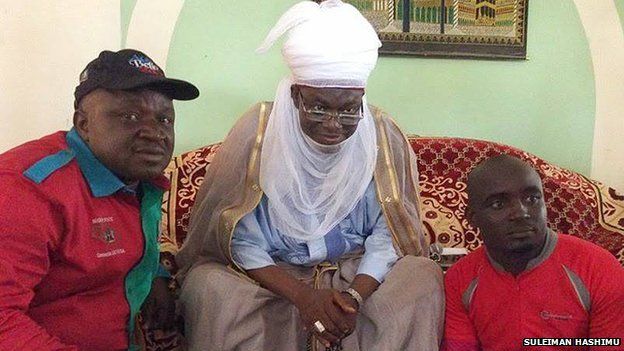 Mr Hashimu (right) meeting the Emir of Agaie, Alhaji Yusuf Nuhu (centre)[/caption] “All I would tell them is to write it down, put it inside an envelope and if I should be given the opportunity to see the president then I will deliver their messages to him,” says Mr Hashimu.

He arrived in the capital, Abuja, on 20 April. He had taken with him 100,000 naira ($500, £330) to cover his meals and accommodation but had only spent 3,500 naira as people along the way had looked after him. He was met by a crowd of people, including members of President Buhari’s support organisation and they arranged a meeting. “When I met the president he smiled, he was so happy with me. “He said, ‘Thank God you look at me as a young man. You encourage me as well because when you make a promise you fulfil it. I am so happy with you.’ “And then he collected the messages from me,” says Mr Hashimu. The meeting with the president was brief and he did not manage to ask everything he wanted. “I’d like to discuss the problems many young people experience because there’s no way you can trek all the way from Lagos to Abuja without seeing different things. I met with different kinds of language, different tribes and cultures.” Mr Hashimu says his journey made him realise Nigerians have huge expectations of the new president. “People came out and sometimes when I saw the crowds I started crying because I was shocked.” He said he had nothing to offer them yet they came out to celebrate with him. “Nigerian people are hungry for change and they have seen change and that’s why they came out.” *Source BBC]]>