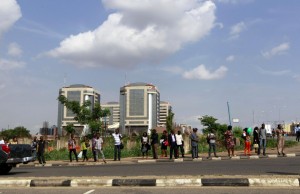 LAGOS (Reuters) – Nigerian fuel marketers agreed to resume distribution on Monday after weeks of disruption led to chronic fuel shortages, bringing phone companies, banks and airlines to a standstill days before the inauguration of the country’s new president.

Chinedu Okoronkwo of the Independent Petroleum Marketers Association of Nigeria told reporters fuel marketers had resolved to call off their campaign of depot closures after a meeting with the finance minister and lawmakers.

Yakubu Suleiman, spokesman for the marketers association, said: “The finance minister has agreed to pay out 159 billion naira ($800 million) to the marketers. The committee to verify the payments will speed up the process and we will be paid before the end of this government.”

The finance ministry was not immediately available to comment.

Besides airlines, which could not obtain aviation fuel, phone companies such MTN and domestic banks had ground to a halt because the private generators that produce most of Nigeria’s electricity ran out of fuel.

“Services are already degraded and some of our customers are already feeling the impact,” Funmilayo Onajide, a spokeswoman for South Africa-based MTN, said. Even though it is Africa’s biggest crude producer, Nigeria has to import nearly all its fuel due to old or inadequate refineries. Fuel importers said they are owed money by the government and had shut depots to press their case. Finance Minister Ngozi Okonjo-Iweala denied this was the case, telling reporters the government had not failed to pay importers and adding they had received money as part of an agreed plan of rolling installments. BANK CLOSURES Besides MTN, Abu Dhabi-listed telecoms firm Etisalat also reported disruption, while a number of banks including Guaranty Trust Bank and Union Bank of Nigeria shut branches early. Many travelers were also braced for long delays after airline Arik was forced to ground a number of domestic flights at the weekend and rival carrier Aero said its flights would not operate regularly. Muhammadu Buhari’s inauguration as president of Africa’s biggest economy and top oil exporter is due on Friday. Buhari, a former military ruler, last month became the first opposition candidate to defeat a sitting president in Nigeria. Despite the fuel distribution deal, shortages may not disappear immediately and could be are an early headache for Buhari, who is taking over an economy creaking under the weight of slowing growth and rising inflation. In the commercial hub Lagos, usually gridlocked streets were relatively clear during the Monday morning rush-hour because many drivers had run out of petrol. Some resorted to buying black market fuel for 500 naira ($2.53) per liter, more than five times the official subsidized price. “Five hours on the road, the cost of coming to work is too high, the cost of transportation is too high,” said Gbenga Forotimi, a civil servant who struggled to find buses and had to pay extra for a journey that normally takes two hours.

The only people smiling were black-marketeers lining the streets with jerry cans of fuel. “I have sold three 30-litre cans of fuel today at 12,000 naira each,” one salesman, who wanted to be referred to as Samaila, told Reuters.