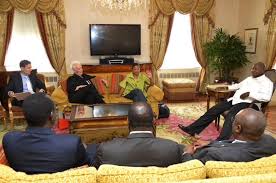 President Museveni and the United States National Security Advisor Susan E. Rice have exchanged views on regional developments and discussed the devastating humanitarian as well as regional economic costs of continued conflict in South Sudan. The two leaders in a bilateral meeting they held on Tuesday at the President’s residence at Waldorf Astoria hotel agreed on the need for the international community and South Sudan’s regional partners to work quickly to achieve peace in the face of the intransigence of the country’s leaders. President Salva Kiir and rebel leader, Riek Machar are yet to agree on a power sharing deal as fighting rages on, leaving hundreds dead and many more displaced. Machar wants the position of presidency and to maintain his own force within the SPLA. They expressed deep concern over the increasing level of conflict in Sudan, specifically the continued conflict in Darfur and the vicious bombing of civilians in Southern Kordofan and Blue Nile States. The two leaders reaffirmed a shared commitment to advancing regional efforts to defeat the Lord’s Resistance Army and continuing cooperation to support the vital work of the African Union Mission in Somalia. They also discussed the important cooperation between the USA and Uganda to counter terrorism and prevent violent extremism in the region. The meeting was attended by Uganda’s Head of Mission and Permanent Representative to the United Nations Dr. Richard Nduhuura and Military Attaché Brig. Silver Kayemba. President Museveni had earlier received Tanzania President Jakaya Kikwete with whom they discussed issues of regional cooperation. He also met and held a discussion with Angolan Minister of Foreign Affairs Hon. Georges Chokoti with whom they discussed matters concerning the Great Lakes region. Angola is the current chair of the International Conference of the Great Lakes Region-ICGLR. The meeting was attended by the Minister of State for Foreign Affairs Hon.Okello Oryem and Uganda’s Deputy Head of Mission to the United Nations Ambassador Kintu Nyago. The President also received the Bechtel Corporation Senior Strategic Advisor for Africa Mr. Tom Cargill who was accompanied by Bochtel Global Head of Sustainability Mr. Tim Robert Nguye. Mr. Cargill told President Museveni that his Corporation is interested in investing in East African regional infrastructural development and capacity building for infrastructural sustainability. The President and his guests discussed possibilities of investing in infrastructural development in Uganda, particularly in the construction of railways and hydro electric power stations and in forming partnership with local engineers to sustain their investments. The President later conducted interviews with the Associated Press and Al Jazeera television networks based in New York. *Chimpreports]]>