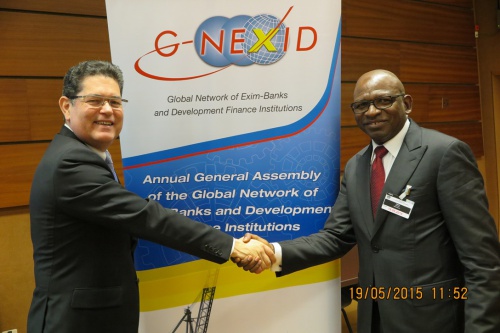 L-R: Mr. Mr. Rubens V. Amaral Jr., outgoing President of G-NEXID and CEO, Banco Latinoamericano de Comercio Exterior, S.A. (Bladex) and Mr. Roberts U. Orya, MD/CEO, Nigerian Export-Import Bank (NEXIM) and the new Honorary President of G-NEXID at the Palais des Nations, Geneva Switzerland on Tuesday, May 19th, 2015[/caption] The Global Network of Export-Import Banks and Development Finance Institutions (G-NEXID) concluded its 10th Annual General Meeting today at the Palais des Nations, Geneva, Switzerland with the election of Mr. Roberts U Orya, the MD/CEO of the Nigerian Export-Import Bank (NEXIM)  as its new ‘Honorary President.’ The G-NEXID, with a membership of 24 institutions – – was established in March 2006 at the joint initiative of Exim Bank of India and UNCTAD, as a platform to boost South-South trade and investment relations. The primary objective of the Network was to serve as a channel to bridge the gap between financing of trade and the achievement of the development goals of developing and emerging economies by fostering South-to-South trade flows. Specific to this goal was tackling the difficulties associated with access to trade finance in the fragile markets of the South aimed at spurring and stabilizing economic growth. To achieve its objectives, the Network promotes information sharing, building trust and encouraging sharing of common lessons, deals and opportunities, effective practices for entering new markets, financing non-traditional goods and services, and establishing risk-sharing methods for investments among its members towards working together and promoting business development. In his acceptance remarks, Mr. Orya thanked the members for his election as the 4th Honorary President of the Global Network of Export-Import Banks and Development Finance Institutions (G-NEXID). According to him, “…I see my election as a privilege to serve and continue in the giant strides already made by my predecessors towards forging and fostering a strategically vibrant and mutually beneficial South-South trade relationship…. It is also an honour to my country, Nigeria, which is the largest economy in Africa…especially as we have just concluded a very peaceful Presidential election.” Validating the excellent work of his predecessors, Mr. Roberts Orya attested that, “the G-NEXID in the past nine (9) years of its establishment has transformed into an association of relevance to realize the objectives of its formation, largely through the able leadership and dynamism of institutions that held the past Honorary Presidency and commitment of members.” Particularly, Mr. Orya lauded the outgoing Honorary President, Mr. Rubens Amaral Jr. who, according to him, had in the last two years stepped up the achievements recorded thus far by taking giant strides to re-invigorate G-NEXID influence and reach. Notable among the specific activities are the new membership drive, increasing revenues, the institution of a Focal Group from active members of the Steering Committee, and the re-organization of the Secretariat, which has culminated in the recruitment of a new Coordinator. Mr. Rubens Amaral Jr., congratulated Mr. Orya on his new role for G-NEXID, and reiterated the strategic importance of trade as a driver for sustainable development, and job and wealth creation. He also reminded members that the South-South cooperation remains a manifestation of solidarity among peoples and countries of the South for their national well-being, collective self-reliance and the attainment of internationally agreed development goals. He urged the Network membership to avail Mr Orya with even greater level of support than that given to him in the past two years. Mr. Guillermo Valles Galmes, the ‘Director for the Division on  International Trade in Goods and Services and Commodities for  the UNCTAD’ had earlier in his remarks stressed the importance of partnership building among G-NEXID members, and assured of the readiness of his Agency to assist the Network to achieve its objectives, especially in terms of deepening South-South trade. He specifically encouraged the G-NEXID membership to ensure that South-South cooperation agenda and South-South cooperation initiatives must be determined by the countries of the South, guided by the principles of respect for national sovereignty, national ownership and independence, equality, non-conditionality, non-interference in domestic affairs and mutual benefit. Mr. Orya stated that his tenure would be devoted towards boosting bilateral and multilateral agreements of all kinds between member export-import (Exim) banks and development-finance institutions (DFIs); as well as the development of appropriate collaborative framework and strategic partnerships with organizations such as Berne Union, Association of African Development Finance Institutions [AADFI], and other such regional economic initiatives to be evidenced by tangible transactional relationships. Expected benefits of such cooperation and partnerships would help improve trade and investment within the member countries; improve information sharing/capacity building – exchange programs among member institutions while enabling regional integration and the growth of niche markets. Mr. Roberts U. Orya is the 4th Honorary President of the G-NEXID after Mr. Rubens V. Amaral Jr. Chief Executive Officer of Bladex (2013 – 2015); Mr. Jean-Louis Ekra, Chairman and President of the African Export-Import Bank (2009-2013); and Mr. T.C. Venkat Subramanian, Chairman and Managing Director of the Export-Import Bank of India (2006-2009). The Nigerian Export-Import Bank  was established by Act 38 of 1991 as an Export Credit Agency with the broad mandate to promoting the diversification of the Nigerian economy and deepening the external sector, particularly the non-oil through the provision of credit facilities in both local and foreign currencies; risk-bearing facilities through export credit guarantee & export credit insurance; business development and financial advisory services etc. In pursuit of its mandate of promoting export diversification and deepening the non-oil sector, the Bank’s current strategic initiatives are targeted towards boosting employment creation and foreign exchange earnings in the Manufacturing, Agro-processing, Solid Minerals and Services (Tourism, Transportation and Entertainment) industries. .  NEXIM Bank embraces the exchange of information on best practices in trade and project finance as important value additions to its operation *Source APO/NEXIM]]>