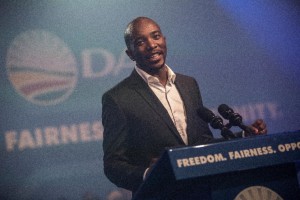 Mmusi Maimane, 34, dismisses such comparisons, but he is set to play a major role at an uncertain time in South African politics after being elected leader of the Democratic Alliance (DA) party on Sunday.

Raised in the township of Soweto — heartland of the anti-apartheid struggle — Maimane joined the DA only in 2009.

He was soon identified by senior party figures as a man who could help it break out of its white-dominated support base.

Maimane was born in a district west of Johannesburg and moved to Soweto as a boy, experiencing the cruelties of apartheid and racial segregation laws at first hand.

A devout Christian, he has a Masters Degree in Theology and regularly preaches at church.

He met his white wife Natalie in church, and lists an Irish priest who stayed in the township as one of the people who had an influence on his early life.

As parliamentary leader of the DA, he has bared his teeth during debates, calling President Jacob Zuma a “thief” and a “broken man” during one of many heated clashes.

By joining the DA, he has provoked some supporters of the ruling African National Congress (ANC) — the party that led the struggle against white-minority rule.

ANC lawmaker Lindiwe Sisulu once called him a “hired native” – an explosive term she was forced to withdraw.

Maimane’s parents still live in Soweto and used to belong to the ANC, though he says they now support his choice of party.

Before getting into politics, the lanky, smart dresser, who was in the 2014 GQ Magazine’s list of best-dressed men, ran his own management consultancy and lectured at a business school in Johannesburg.

In 2014, he lost elections for premier of Gauteng province, of which Johannesburg is the capital.

His glitzy campaign appeared closely modelled on US President Barack Obama’s 2008 presidential race, complete with a similar blue poster and the slogan “Believe”. 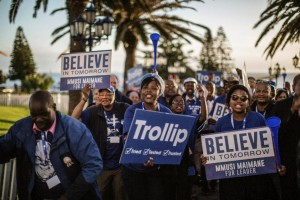 The downside of public life was underlined this week when his wife, with whom he has two children, was forced to react to anonymous allegations about his private life.

“He’s the real deal. The mud will simply wash off,” she tweeted.

South Africa looks set for some difficult years ahead as the economy wallows in the doldrums and poor blacks vent their increasing frustration against Zuma and the ANC.

The test for Maimane will be to boost that figure by drawing in more of South Africa’s middle-class black voters.