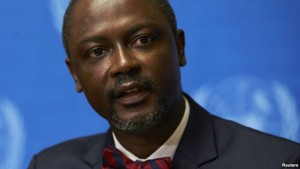 FILE – Axel Addy, Liberia’s minister for commerce and industry, shown at a U.N. news conference in September 2014, says his country is is putting in place a management system to deal with another disease-related emergency, should one arise.[/caption] GENEVA—Liberia’s minister of commerce and industry says Liberia has had no new cases of Ebola for a while and is near the point at which it can be declared Ebola-free.

“May 9 is our magic date,” Minister Axel Addy said. “If there are no new cases, and I believe there will be no new cases, we will have met the threshold. Some of the Ebola treatment centers have actually been decommissioned, and there are others that are being decommissioned.” Addy told VOA that the government knows Ebola could recur and is putting in place a management system to deal with another emergency, should it arise. “It includes putting in place the right health infrastructure to deal with the response, to track any sort of new potential cases and to monitor what is happening along the borders,” he said. Besides strengthening its health system and protecting its people from the possibility of a new outbreak of this deadly disease, Liberia is faced with the huge task of reviving its economy.  Before Ebola struck, Liberia was projecting a 2014 gross domestic product growth rate of between 5.9 and 7 percent.  After the crisis hit, GDP dipped to below 1 percent. Augustine Jarret, Liberia’s minister of state without portfolio, said the Ebola crisis has had a cascading effect on all aspects of the economy, especially on Liberia’s two main products, rubber and iron ore.  He said companies closed, thousands of people lost their jobs and farms became idle, stripping thousands of farmers of their income. He said it was clear that Liberia cannot remain dependent on two products and must diversify into other areas.  He said Liberia plans to put more emphasis on working with the private sector as opposed to the government side. “Most of what we have seen in many, many decades before is that most of the people who work in Liberia work in the government sector, and that is going to change,” Jarret said. “Our focus is on the private sector — private-sector jobs, private-sector investments, and trying to move the economy in the direction where private sector players are the drivers of our economic growth and vitality.” The Liberian ministers said they were working hard to attract private investment to help build up infrastructure and to revive major road, bridge and other construction projects that had stopped during the Ebola epidemic. They noted that a lot of money and work would be expended on reviving the agriculture sector, in which 70 percent of the labor force is employed.
*Source VOA]]>