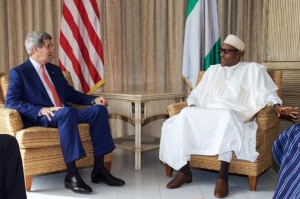 John Kerry meets Muhammadu Buhari, at the US Consulate in Lagos on January 25, 2015 (AFP Photo/Akintunde Akinleye)[/caption]

Lagos (AFP) – Secretary of State John Kerry will lead the US delegation to the inauguration of Nigerian president-elect Muhammadu Buhari in Abuja next week, the White House said Tuesday.

Buhari will be sworn in on May 29 after defeating outgoing president Goodluck Jonathan in the first Nigerian election that saw the opposition candidate defeat an incumbent.

The White House said the other members of the US delegation would be announced in the coming days.

A large number of African and Western leaders are expected to attend the ceremony.

Kerry visited Nigeria in January in the run-up to the vote and issued a clear warning that the strength of future US cooperation would be tied to the success of the polls.

The historic election was widely praised by domestic and foreign observers, with analysts saying it had solidified democracy in Africa’s most populous country, top economy and leading oil producer.

Jonathan’s Peoples Democratic Party had controlled the federal government since the end of military rule in 1999.

Apart from taking charge of the presidency, Buhari’s All Progressives Congress also won majorities in both the Senate and lower house of parliament.