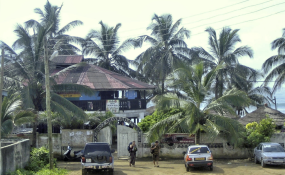 Photo: C.A. John and Clare
A resort on the Ghana coast.[/caption] In Prampram, a town just an hour’s drive east of Ghana’s capital Accra, many holiday houses line the shores of the South Atlantic Ocean. One of them belongs to Jerome Thompson. Located only 500 metres from the water, Mr. Thompson’s house is resilient to the effects of the salt and wind.