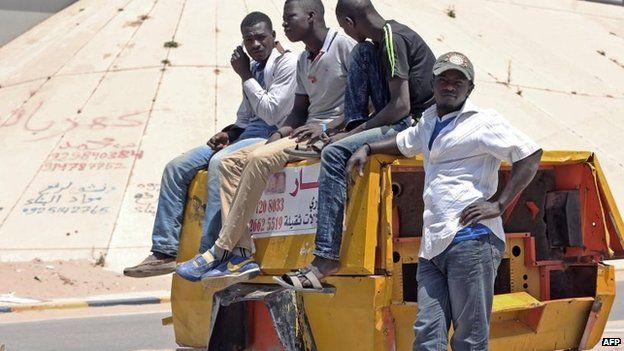 Saliou Ndiaye set off from Senegal last July with the intention of making the dangerous crossing over the Mediterranean to Europe.

But after surviving a gruelling desert trip to Libya and escaping from rebel capture, the 30-year-old would-be migrant was deported back home – more than $3,000 (£2,000) the poorer. He tells the BBC’s Raissa Ioussouf in Dakar about his seven-month journey and why he was prepared to risk his life, but would not do so again: I wanted to go to Europe because it is well known that you earn a lot there. In Senegal there is nothing; you can’t find a job. I used to work as a painter here and would only earn 3,000 CFA francs ($5; £3.20) per day. But what can you do with that little money? I have two older brothers and three younger brothers; they also have trouble finding jobs. One of my older brothers moved to Mauritania. I spoke to my friend who lives in Italy on Skype, and he told me that I should go through Libya, and that I would need to pay 400,000 CFA francs for transport; it took me four years working on a construction site to earn the money I needed. When I asked my friend if it was easy to get to Italy he told me that you suffer a lot during the journey. My family didn’t know that I was going to Europe – I let them know once I was in Agadez in Niger. I knew that if I had told them in advance, they would have never accepted it. Some members of my family live in Europe but they went there legally, but I am the first one to try the clandestine way.

I first went through Bamako in Mali, then Niamey and Agadez in Niger. You encounter so many problems when you go to Libya because you have to go through the desert and people die there. We were 26 people in an overloaded 4×4; the car broke down a few hours after departure. I spent a week in the desert. After four days we ran out of food and water. The last three days I didn’t eat or drink; three men died and we had to bury them there. Thanks to God I was able to keep going. There was no-ne else in the desert, but finally a car came and helped us. When we reached the Libyan town of Sabha, the rebels took us prisoner.

Saliou Ndiaye”Even if you paid me to go again I wouldn’t go”[/caption] They wanted money and asked for 200,000 CFA francs ($342; £220) each. If you don’t pay, they make you call your family and force them to pay. If your family sends the money you are free, if not you stay locked up. I refused to call my family and spent four days suffering; you get beaten up – you don’t eat or drink. On the fifth day I broke the door down and fled with my friends; we ended up in a Senegalese hostel. I worked in Sabha as a scrap merchant for two months. When I earned enough money I went to [Libya’s capital] Tripoli, but it was chaos there as well. I worked there for another month to pay for my journey to Italy. I wanted to go with the first boat, but the day the first boat left, I felt sick and didn’t feel confident about leaving. That boat got into an accident and there were no survivors.

At the beginning, I really wanted to go to Europe, but when I started earning money in Libya I didn’t want to leave anymore. I made good money – in four months I earned 2m CFA, although in Europe you can earn that sum in a month. But one day the police caught us coming home from work; they stole all our money and threw us into an overcrowded prison. There were 200 people in a 30m sq room. I was transferred to another prison in the Libyan town of Misrata, where I spent three months before being sent back to Senegal. I am sorely disappointed I didn’t make it to Europe.

Borders ‘should be closed’ 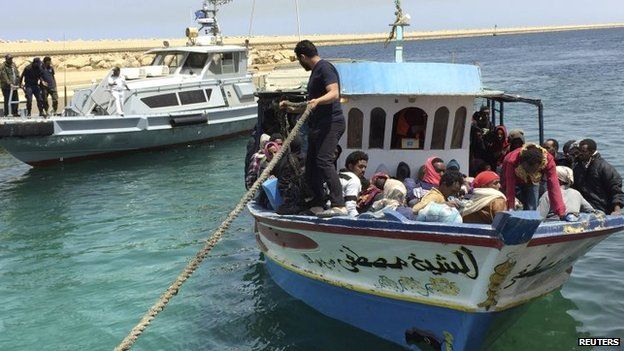 The UN estimates that 60,000 people have already tried to cross the Mediterranean this year[/caption] But I don’t want to try travel illegally again, it’s too dangerous and now I know what the reality out there is. I think it’s good that Europe is trying to stop the smugglers because people die every day trying to cross the sea. But I also believe that African leaders should close their borders because people go from Senegal, Mali, Burkina Faso, and Niger without problems. There is little border control and if you pay, you can go through even if you don’t have an ID. If I had known how bad it was I wouldn’t have gone. Even if you paid me to go again I wouldn’t go. I was one of 405 Senegalese who were sent back in February. Upon our arrival, a government official promised he will find us jobs – but up until now we haven’t heard back from him. *Source BBC]]>