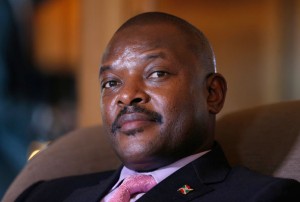 “If the people of Burundi put their trust in us, it will be the last mandate I seek, as determined by the Constitutional Court,” Nkurunziza said in a televised speech.
Holding an election was “the only solution” to the crisis triggered by his bid to prolong his 10-year tenure, he added.
Over a dozen people have been killed and scores wounded since late April, when the ruling CNDD-FDD nominated Nkurunziza to stand for reelection, triggering daily protests.
The police has been accused of using live ammunition in clashes with protesters in the capital Bujumbura.
Over 35,000 Burundians have fled the country in recent weeks, mostly to Rwanda.
Opposition parties and civil society groups say Nkurunziza’s third-term quest violates both the constitution, which limits a president to two terms in office, and the accords that ended a 13-year civil war between Tutsis and Hutus in 2006.
The Constitutional Court found in favour of the rebel leader-turned-president in a ruling Tuesday, saying his first presidential term did not count as he was elected by parliament, not directly by the people.
‘Last chance’
The government and opposition held talks Wednesday to try to defuse the tensions.
“This is a last chance… they have to come up with concrete solutions so that elections can be held in acceptable conditions,” a Western diplomat said of the talks, warning international funding for the polls could be cut if a deal was not struck.
But the main opposition leader Agathon Rwasa said the crisis had already gone too far and demanded the June 26 vote be postponed, arguing the “credibility of the electoral process is already in doubt”.
Rwasa also called for the ruling party’s youth wing, a powerful militia called the Imbonerakure, to be disarmed.
At least 16 people were wounded in renewed clashes Wednesday in Bujumbura, according to the Red Cross. Witnesses reported at least two grenade explosions.
Burundi’s foreign ministry downplayed the violence, saying that “peace and security reigned” across the country, apart from “a few districts of the capital… shaken by illegal demonstrations and violence triggered by certain political opponents.”
The police arrested a leading activist, Audifax Ndabitoreye, for “insurrection,” an AFP journalist witnessed.
The arrest of the dual Burundi and Dutch national came a day after he called for further protests.
He was released later in the day, but told AFP it was possible he would still have to be questioned by the intelligence services at a later date.
Vice-President Prosper Bazombanza offered to release demonstrators who had been arrested, lift arrest warrants issued for key activists and reopen independent radio stations — on condition that “the insurrection stop”.
Crisis summit called
East African foreign ministers, from neighbouring Rwanda and Tanzania as well as Kenya and Uganda, met in Bujumbura Wednesday to discuss the crisis.
The ministers announced an emergency meeting of regional leaders to discuss the situation on May 13 in Tanzania.
Tuesday’s thumbs-up from the constitutional court to Nkurunziza’s re-election bid incensed protesters.
The court’s vice-president fled the country after refusing to sign the judgement.
US Secretary of State John Kerry said on Monday he was “deeply concerned” about Nkurunziza’s bid to remain in power, which he said “flies directly in the face of the constitution”.
The head of the UN’s refugee agency, Antonio Guterres, said he was “extremely worried” by the situation.
“We thought Burundian refugees were something we would never have to discuss again, unfortunately we are back to having a significant outflow of Burundians,” he said, adding: “It must stop. We have enough crises in the world.”
Rwanda has said it has received reports linking the violence to ethnic Hutu rebels from the Democratic Front for the Liberation of Rwanda (FDLR), who fled Rwanda into Democratic Republic of Congo after the 1994 Rwandan genocide of mainly Tutsis.
Rwanda has previously sent troops into DR Congo to tackle the rebels.
Burundi’s foreign ministry dismissed the reports, saying such forces would not be “tolerated on Burundian territory.”
*Source Monitor
]]>