KINSHASA, Congo (AP) — Congo’s government is bringing in outside experts to investigate the long-term impact of some $6.7 billion in contracts with Chinese companies that critics say could exploit the central African nation’s mineral riches. 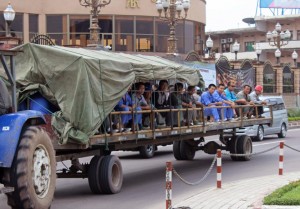 In this photo taken on May 20, 2015, Chinese workers travel on the back of a trailer pulled by a tractor on their way to work in Kinshasa, Democratic Republic of Congo. Congos government is bringing in outside experts including officials from the World Bank and the United Nations, to investigate the long-term impact of some $6.7 billion in contracts with Chinese companies that critics have said could exploit the central African nations mineral riches.(AP Photo/John Bompengo)[/caption]

Congo’s government has a 32 percent stake while China has 68 percent in the mining project called Sicomines. It was created in 2008 but construction did not officially start until three years later, said Jean Nzenga Kongolo, deputy general manager of Sicomines.

It now employs about 3,000 people, of whom 70 percent are Congolese, said Kongolo.

To assess the project’s impact, officials from the World Bank and the United Nations visited the mines this week.

The project “is truly in the right lines and objectives of the World Bank which is to fight against poverty,” said World Bank representative Ahmadou Moustapha Ndiaye. The U.N. official also praised the project.

However, critics say a more thorough evaluation of the contract still must be done.

As part of the deal, China’s Railway Engineering Corporation and Sinohydro Corp. are constructing about 3,000 kilometers of roads and railways in Congo. Universities, hospitals and health centers are also being built, according to the agreement.

Tshiombela said the quality of the construction work “leaves much to be desired.” One road in the capital of Kinshasa — Sendwe Boulevard — already has potholes just a year after it was completed, he said.

Sun Rui Wen, the director general representing China’s interest in Sicomines, defended the project, saying it is based on “equality and mutual benefit.”

The deal also allows the Chinese companies to mine copper, cobalt and gold, according to the agreement seen by The Associated Press.

Congo should be able to repay the investment after 25 years, said Moise Ekanga Lushyma, executive secretary coordinating the project for the Congolese government. At that point they will pay management fees or negotiate another loan — not necessarily with the Chinese — to produce minerals, he said.