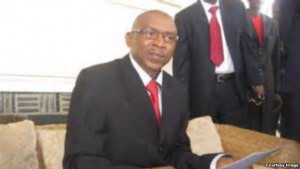 Agathon Rwasa of Burundi[/caption] The leader of Burundi’s main opposition party – the National Liberation Forces (FNL) – has called for the country’s upcoming election to be postponed due to what he says is ongoing tension and violence. In an interview with VOA, Agathon Rwasa, a former rebel leader turned politician, also called for the intervention of the international community to ensure the country’s peace and stability before an election can be held. “We’ve been asking all the partners to Burundi to intervene,” Rwasa said. “We cannot accept that one [person] can make changes his way, while this could be harmful to the nation. Moreover, I may say that the international community must be involved, since after all, they are key partners in the economy of this country and in different areas of the life of the nation.” Rwasa says President Pierre Nkurunziza should not forget that he became president due to the signing of the Arusha agreement. “He [should] remind himself and his fellows that after all there is a minimum of a gratitude one must show to Burundians and the international community, otherwise, I think maybe him and his fellows would just be in the bushes in Congo,” he said. Rwasa who met with the foreign minister from the East African Community on Wednesday, said Mr. Nkurunziza is to blame for the current violence following his decision to seek a third term bid. The move, he says, undermines the constitution as well as the spirit and letter of the Arusha accord that ended the civil war. Rwasa’s comments were echoed by the chairperson of the African Union (AU), Nkosazana Dlamini-Zuma, who also called for the postponement of the Burundi election, citing the unrest. The violence has so far forced an estimated 40,000 citizens to flee to neighboring Rwanda. “I totally support the position of the AU and I have already proposed such a thing in a different meeting I had with some officials, including the panel of foreign ministers we met yesterday, because there is no security at all…In this condition how can one pretend to organize a peaceful election when there is a turmoil of that kind in the nation? Also there is no room for democracy once the constitution is violated,” he said. “I mean the position of the CNDD-FDD and President Nkurunziza to run for a third term, which is totally unacceptable, because it is against the constitution and against the Arusha agreement and the spirit of reconciliation we have accepted to implement in our country,” Rwasa added. The East African Foreign ministers were in Bujumbura as part of a fact finding mission to ascertain the situation in Burundi, ahead of a heads of state regional summit scheduled to be held in Tanzania on May 14. The foreign ministers met with President Nkurunziza, as well as opposition and civil society groups. Burundi is expected to feature high on the agenda of the regional leaders at the summit. “I think they have gone back well equipped to be able to prepare a good meeting about the situation in Burundi. Maybe we should just wait until they hold their meeting and we know what their decision is,” said Rwasa. Rwasa disagrees with the decision of the Constitutional Court, which paves way for incumbent President Nkurunziza to run for a third term. *Source VOA]]>