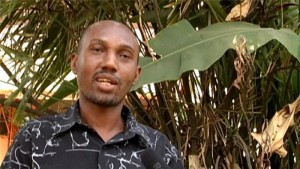 Zedi Feruzi was the head of the opposition party Union for Peace and Development [Citi FM][/caption]Zedi Feruzi, a leader of an opposition party, has been shot dead alongside his bodyguard in Bujumbura, a leading opposition figure has confirmed to Al Jazeera. Feruzi, whose bloodied body was found in the Ngagara district of Bujumbura on Saturday evening, was the head of the opposition party Union for Peace and Development (UPD). Leading opposition figure, Agathon Rwasa, said there was no information on who had killed Feruzi, but he had spoken out against President Pierre Nkurunziza’s decision to stand for a third-term in office. Residents said a third person, believed to be another police officer tasked with protecting Feruzi, was seriously injured in the incident. “We heard around 20 gunshots, everyone fell to the ground, people saw a Toyota car speeding away,” said a neighbour, who did not witness the shooting himself. Around an hour after the attack police had yet to arrive at the scene, according to the AFP news agency. Meanwhile, two barricades of tyres were set alight in the district, where local youths were sealing off streets and alleyways to outsiders. Saturday’s assassination will add to tensions in Burundi after a month of protests against President Nkurunziza. A coup attempt to remove Nkurunziza by army officers opposed to his decision to contest the presidential vote failed after the intervention of loyal members of the military. More than 20 people have died in anti-government protests since the president’s announcement in late April that he will run for a third term in office. *Source Al Jazeera]]>