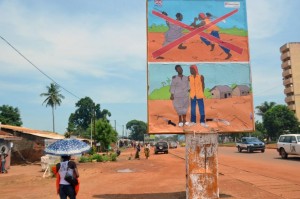 “Let Us Reconcile” implores a banner on a statue at the entrance to the main market in Bangui, in a Muslim neighbourhood that gave refuge to people fleeing religious strife that swept the Central African Republic (AFP Photo/Patrick Fort)[/caption]

The market was a thriving hub in the capital’s Kilometre Five district before a March 2013 coup that led to the first conflict directly pitting Christians against minority Muslims in a nation with a long history of unrest.

The bloodshed halted business and displaced scores of thousands of terrified people as successive waves of violence meant that nobody was safe in Bangui for many months.

“Back then, Kilometre 5 was the Alamo,” recalls a security specialist, referring to the 1836 siege by the Mexican army of a mission in Texas that ended in the slaughter of all the defenders.

Michel Djotodia, the country’s first Muslim president who was put in power by rebels in the immediate aftermath of the coup, stepped down in January 2014 under strong international pressure.

Though Djotodia had disbanded the armed Seleka coalition that backed him, many former rebels went rogue and carried out vicious attacks on Christian residents.

Vigilantes massacred hundreds of Muslims and drove many to seek safety in Seleka-guarded KM-5, which is now patrolled by foreign peacekeeping troops.

“KM-5 is one of the most tightly secured places in the city of Bangui today,” said Public Security Minister Nicaise Samedi Karnou, for whom the district is an economic priority.

The gradual resumption of trade goes together with efforts to pacify the poor, landlocked nation, which has been prey to unrest since independence from France in 1960.

Customers consider it safe to come to the market and buy foods like cassava, rice, meat, flour and spices, along with clothes, pots and pans and cleaning products.

Traders swap greetings with armed African soldiers riding by in their military vehicles.

But French peacekeepers receive a far frostier reception after a scandal broke last month over accusations of child rape involving at least 14 soldiers. 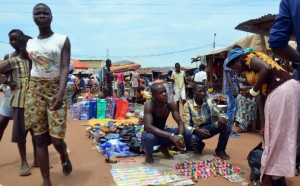 People walk through the main market at “Kilometre Five” in Bangui on May 18, 2015, where refugees, mostly Muslims, gathered during inter-relgious violence that wracked the Central African Republic in December 2013 (AFP Photo/Patrick Fort)[/caption]

“We don’t like the French,” Khalil says. “If only they had approached Muslims in a friendly way.”

Yet there are signs of reconciliation between the two faiths.

Eloge Bouteh, a Christian vendor of cotton swabs, is both neighbour and friend to Ali Uche, a Muslim who sells earrings.

“My big brother, my cousin and my grandmother died during the conflict, but Christians and Muslims are already together,” Bouteh says.

“We used not to get on, but now we’re starting to understand each other. During the events, we all fled to go home, but it’s calm now. People move around freely.”

Uche says he lost “my father, my mother, children (and) younger brothers,” but puts his country first, insisting that he is “Central African” like his friend.

“Christians and Muslims, they’re all my customers, but today the market is dead” compared with the bustling place it once was, he adds.

“This is good, it’s mechoui, it’s Muslim. I’m a Christian and I eat my brother’s food. It was politics that drove us apart.” 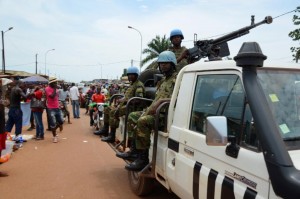 Though the mood is broadly optimistic, problems persist. While normal life prevails in daylight, residents say they don’t dare to venture out at night.

Market produce mostly comes from neighbouring Cameroon, but truckers dare not take to the roads unprotected for fear of attack. Goods are brought twice a week in convoys escorted by UN troops.

Even former rebels remain active and run a racket to extort 1,000 CFA francs (1.5 euros, $1.7) from each trader every week, according to a source close to the market vendors.

A butcher was killed recently, apparently for refusing to pay up, according to imam Kobine Layama, president of the Islamic Community of the Central African Republic.

“Before, they (Muslim fighters) were the defenders and the people rejoiced in their presence, but today they hold the population hostage,” he said.