By CARA ANNA* UNITED NATIONS (AP) — There is so much freedom in Uganda that it’s nearly anarchy, the country’s president joked, stepping carefully around what’s an open secret back home: Yoweri Museveni will run for yet another term next year, and surely he will win. [caption id="attachment_17924" align="alignleft" width="300"] 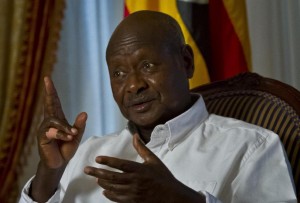 Republic of Uganda President Yoweri Museveni speaks during an interview, Tuesday, May 5, 2015, at the Waldorf Astoria in New York. Supporters believe that Museveni, who is one of the longest serving leaders on the African continent, will win another term should he decide to seek one in 2016. (AP Photo/Bebeto Matthews)[/caption]

Museveni, casual in an untucked dress shirt during an interview in a Waldorf Astoria hotel suite, gave The Associated Press his version of power and succession on the sidelines of his appearance at a high-level U.N. meeting, where he scolded the United States and the other permanent members of the Security Council on their approaches to Africa’s problems.

Later Tuesday, with his role on display as the leader of a regional power and one of Africa’s most militarized countries, he met with White House National Security Adviser Susan Rice to discuss the conflicts in South Sudan and the Darfur region of Sudan, the White House announced.

Dismissing accusations from critics that his rule over three decades has become more and more authoritarian, far from the days when former President Bill Clinton praised him as one of a “new breed” of reform-minded African leaders, Museveni told the AP, “If anybody has been bullied, it is me.”

And as he prepares to turn 71 in September, Museveni appeared little concerned about a possible legal challenge to another presidential term by those who argue he will be too old to be in charge. A new term would take him over Uganda’s 75-year-old presidential age limit.

But even as regional neighbor Burundi is shaken by deadly protests over the not-unusual African scenario of a president who wants to run again, Museveni said he will let Uganda’s courts decide.

More than 30 floors above midtown Manhattan, his conversation was only faintly marked by the sound of sirens. Museveni was comfortable, saying that the future of the presidency depends on what the ruling party wants.

“The party,” as Museveni put it, because there are few other political parties with any power in Uganda, and those have been allowed only in recent years. Until then, he argued that poor African countries could not afford political rivalries. “That chaotic way of managing politics is not our ideal,” he said Tuesday. Internal party chaos is no better: He fired his prime minister last year.

Instead, the already emerging 2016 campaign looks like this: Huge posters in the capital, Kampala, declare him the ruling party’s sole candidate.

And at party events, loyalist members are known to kneel before Museveni and beg him to run again, saying he is the best they ever had.

Perhaps he cannot disappoint them. He made it clear Tuesday, whoever the party chooses will win: “Yes. Yes. Absolutely.”

When told, “Well, they want you,” Museveni replied, “Well, if they want, then we shall see that when we get there.”

There are conditions under which he might decline to run, he said, but they are not for the press to know. “Stop politicking and get to work,” he tweeted earlier this year.

“To an American, what you need to understand is Museveni’s been in power while America’s had six presidents,” said Nicholas Opiyo, a prominent Ugandan lawyer and watchdog. The only thing that would allow a peaceful transition is if Museveni is not allowed to run because of the age limit, he said, “or if, by an act of God, he drops very sick.”

Here is a sketch of Museveni’s and Uganda’s rise: Independence in 1962 from the British, the ousting of a repressive regime in 1986, presidency since then, wrestling with vast problems of the economy and the AIDS crisis, efforts for which he was praised.

There has never been a peaceful transfer of power in all that time. Museveni gave no details Tuesday on what such a transition might look like in his country of 36 million people.

“It’s all provided for in the constitution,” he said. And does he want the presidency to pass one day to his son, who leads Uganda’s special forces and who observers say is likely being groomed as the future leader? “Oh no, it is not what I like, it is what my party wants and what the country needs,” Museveni said.

His reputation has been damaged by accusations of corruption, human rights abuses, and electoral fraud. Some observers worry he has become the kind of dictator he once threw aside. Uganda’s problem, he once said in 1986 when he became president, “is not the people, but leaders who want to overstay in power.” 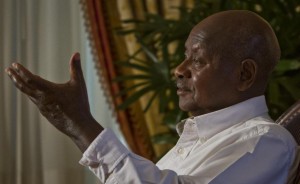 Republic of Uganda President Yoweri Museveni speaks during an interview, Tuesday, May 5, 2015, at the Waldorf Astoria in New York. Museveni, who turns 71 in September, is one of Africas longest serving leaders. (AP Photo/Bebeto Matthews)[/caption]

Nearly 30 years after becoming president, the former Marxist rebel still speaks in terms of liberation on one hand, control on the other. Uganda, and Africa, must be transformed. Uganda must shift from a third-world country to a middle-class one. Africa’s markets must be integrated. Prosperity is key.

“Some will be achieved while I’m in heaven, but I will play my role,” he said.

Western powers, he has said, must stop their imperialist policies on the continent. And if the Security Council had listened to Africa before authorizing military action in Libya a few years ago, he said in his U.N. speech Monday, that country’s current chaos and the deadly journeys of migrants on the Mediterranean could have been avoided.

“African solutions for African problems,” he said in his speech. Rwanda’s neighbors could have stopped that country’s genocide two decades ago, he declared. But critics have called him reckless; he has backed rebels fighting governments in what is now Congo, Rwanda, Central African Republic and Somalia. Museveni has said he was helping fight corrupt regimes.

Closer to home, he was asked about Uganda’s recent notoriety over an attempt at harsh anti-gay legislation, which a court invalidated last year. Some fear that another attempt might be made with an election coming. But Museveni, who signed the bill but correctly warned about its effect on economic ties with the West, said, “It’s really not a priority for us.”

In any case, Uganda doesn’t penalize gay people, he said. “But we also don’t promote that behavior. Because it is not the normal behavior.” Maria Burnett, senior researcher for Human Rights Watch, said Tuesday that “no doubt about it,” Uganda remains a difficult place to be gay.

In fact, Museveni said of his country at large, smiling at the mere suggestion of authoritarian rule, there is “so much freedom that it is almost a problem in itself.”