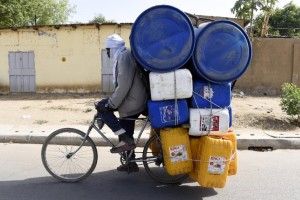 The latest economic forecast for Africa is a downward revision from projections made in 2014 which suggested the region’s economy would expand by 5.7 percent this year (AFP Photo/Philippe Desmazes)[/caption]

And future growth could be spurred by the continent’s population doubling to two billion over the next 35 years, repeating in Africa the economic boom seen in Asia’s biggest countries.

“Africa’s gross domestic product (GDP) growth is expected to strengthen to 4.5 percent in 2015 and 5.0 percent in 2016 after subdued expansion in 2013 (of 3.5 percent) and 2014 (3.9 percent),” said the report, co-authored by the Organisation for Economic Co-operation and Development (OECD), the African Development Bank and the UN Development Programme (UNDP).

The continent has so far been “relatively resilient to the sharp fall in international commodity prices,” said the report, such as crude prices which dropped more than 50 percent between June and January.

And if the commodity prices remain low, the report warned that the economies of resource-rich countries, such as leading oil exporters Nigeria and Angola, may slow down as their governments will inevitably have to trim spending.

The latest forecast is a downward revision from projections made in 2014 which suggested Africa’s economy was going to expand by 5.7 percent this year.

At the same time, economists noted that Africa’s increasing population could boost growth in much the same way that population booms fuelled development in China and India.

“This phenomenon may be helpful as was the case with India and China because the demographic dividends usually help growth,” OECD Development Centre director Mario Pezzini told AFP.

But, if Africa fails to absorb the enormous youth bulge in the labour market, “then you may have very strong tensions,” he added. 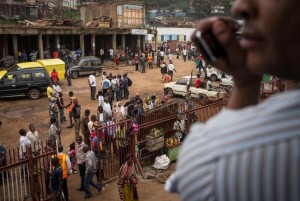 In a recent report on the African economy, future growth could be spurred by the continent’s population doubling to two billion over the next 35 years (AFP Photo/Federico Scoppa)[/caption]

An estimated 23 million youths are expected to enter the African labour market this year alone, according to the report.

Of those, four million will be in North Africa, the region that dragged down the continent’s growth rates last year, as a result of fall-out from the 2011 Arab Spring popular uprisings.

Southern Africa slowed to below 3.0 percent in 2014 due to labour unrest in South Africa, the continent’s most advanced economy which grew by just 1.5 percent.

“In part the lower rates of growth in Africa were related to the social crises in South Africa and we are expecting that (they) are reducing now and as such South Africa will have a rate of growth that’s better than in the past,” said Pezzini.

Oil-rich Nigeria, the continent’s largest economy, which was not at the epicentre of the Ebola crisis, saw 6.3 percent growth in 2014 fuelled mainly by non-oil sectors.

But the countries worst hit by Ebola — Liberia, Ghana and Sierra Leone — will be seriously affected and economic activity will remain subdued “notably in Sierra Leone where the economy is expected to contract,” from a previous 10 percent growth rate, the report said. East Africa was the best performing region, accelerating more than 7.0 percent last year, with Ethiopia being counted among the best. But that growth may slow down to 5.6 percent this year partly due to unrest in oil-producing South Sudan.

The latest continental predictions in the OECD-led report are in line with the International Monetary Fund’s projections of 4.5 percent in 2015, but are slightly more optimistic than the World Bank’s forecast of 4.0 percent.