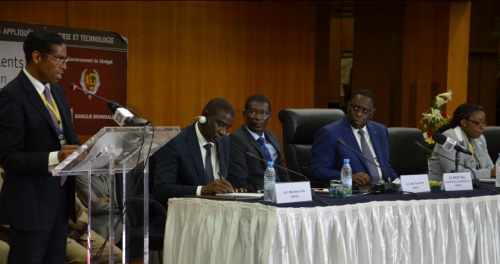 Dr Álvaro Sobrinho announces the Africa Business Champions for Science in Dakar, Senegal, on the invitation of His Excellency President Macky Sall[/caption] Dr Álvaro Sobrinho, the prominent African businessman and Chairman of the Planet Earth Institute NGO , led the first meeting of the ‘Africa Business Champions for Science’ last month in London. The Africa Business Champions for Science is a new group of influential figures from industry with a passion for science, technology and innovation on the continent. Alongside Dr Álvaro Sobrinho of Angola, Lionel Zinsou of Benin (CEO and Chairman of PAI Partners) and Justin Chinyanta of Zambia (CEO and Chairman of Loita Capital Partners), have both been appointed members. The Africa Business Champions for Science group was formally outlined in a Call to Action at the ‘Partnership for Skills in Applied Sciences, Engineering and Technology (PASET)’ Regional Forum in 2014, in Dakar, Senegal. The World Bank is facilitating the PASET initiative, which seeks to help meet Africa’s skills needs in Applied Sciences, Engineering and Technology (ASET) fields for the socio-economic transformation of Africa. PASET serves as the platform for public-private partnerships; engaging in related advocacy, analytical and technical streams of work; and supporting African governments to mobilize funding to support country and regional level ASET initiatives. The Africa Business Champions for Science group will work alongside African governments, the PASET Steering Committee (comprising of three African Ministers from the Education sector – Ethiopia, Rwanda and Senegal and the World Bank); and a high-level Consultative Advisory Group (comprising of scientists and academics). A high level meeting of African Heads of State and the African Business Champions is now being planned, at which further members and commitments will be announced. Mr Makhtar Diop, Vice-President for Africa of the World Bank.

“The African continent has experienced very strong growth over the past decade and it has been noted that this growth has really repositioned the African continent and changed the perception of the African continent. However while doing so, we have not had the transformation we would like to have; we have not had a structural transformation of African economies. To address this we need a combined effort of all sectors, and the role of industry is absolutely crucial. This new group of prominent African entrepreneurs and business figures can play an important role in putting the continent back on a path of sustainable growth, of inclusive growth, and a path toward transformation of the structure of our economies.” Dr Álvaro Sobrinho, Chairman, Planet Earth Institute “For too long business and scientific communities have operated in isolation in Africa. As we seek to move from economies based on resource to those based on knowledge, this disconnect has to be addressed head on. I’m delighted to be working with a group of inspirational business figures and in tandem with international and national organisations at the heart of this debate, to play our part in making sure Africa’s scientific progress delivers for the whole continent. And I call to others interested in the initiative to work with us” The Planet Earth Institute (PEI) is an international NGO and charity working for the ‘scientific independence of Africa’: •          Dr Álvaro Sobrinho is an Angolan banker, investor and philanthropist: •          In 2014, the World Bank and the Planet Earth Institute (PEI) signed an agreement to co-ordinate a new group of ‘Africa Business Champions for Science’ at the World Bank Headquarters in Washington DC *APO]]>