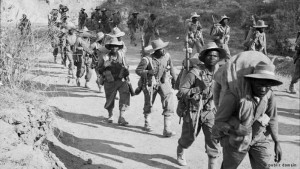 Troops of the East Africa division marching in Burma[/caption] More than a million African soldiers fought for colonial powers in World War II. Few of them understood why. Survivors received little compensation and veterans are calling for recognition of their rights. 70 years ago, on May 8, 1945, the German armed forces capitulated, marking the end of the Second World War, at least in Europe. In other parts of the world, the war was not over – like Hiroshima where Allied forces dropped the first atomic bomb in August 1945. This shows how relative perspective can be. It could be seen as a sign that Germany still lacks awareness of the dimensions of the Second World War outside Europe. Not only the hundreds of thousands of dead in Hiroshima bear witness to this. African colonies were also drawn into a war that was not theirs. From 1939 hundreds of thousands of West African soldiers were sent to the front in Europe. Countless men from the British colonies had to serve as bearers and in other non-combatant roles. In France, Germany and Italy, in India, Burma or on the Pacific islands, African soldiers died for their European colonial masters. Forced recruitment European weekly newscasts at the time spoke of volunteers. But the reality was different. 93-year-old war veteran Albert Kuniuku is the chairman of the Veterans’ Union in Kinshasa, capital of the Democratic Republic of Congo. Until 1960, the country was ruled by the Belgians. Kuniuku speaks of forced recruitments. I was working in a textile company when they came to take us away. Then they went to other companies. All the young workers were recruited. No one was younger than 30,” Kuniuku told DW. Senegalese veteran Yoro Ba remembers the day when the French came to his village. “If we men had stayed at home, we would have been taken to court and probably shot dead.” What they were to fight for, was not explained, said Baby Sy, a veteran from Burkina Faso (then Upper Volta). “People didn’t understand when they heard talk of fascism. We were just told that the Germans had attacked us and considered us Africans to be apes. As soldiers we could prove that we were human beings. That was it. That was all the political explanation there was at the time,” Sy told DW. All are equal in war [caption id="attachment_18169" align="alignright" width="300"] 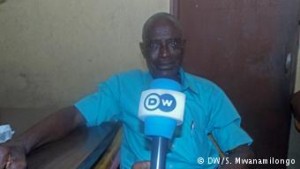 Albert Kuniuku is one of the few soldiers who returned[/caption] Whether as prisoners of war or fighting at the front, the African soldiers came into close contact with European soldiers and with the reality of life in Europe. That changed their awareness and later their political activity back home. Senegalese writer and filmmaker Ousmane Sembene, himself a former colonial soldier, put it like this. “In war we saw the white men naked and we have not forgotten that picture.” That had far-reaching consequences. During the war the African soldiers saw their so-called rulers from Europe lying in mud and filth, they saw them suffering and dying, says German journalist Karl Rössel who spent 10 years researching the topic in West Africa. “As a result, they realised that there are no differences between people,” he said. This in turn led to many former soldiers joining independence movements in their home countries. Proud yet bitter But not all veterans were welcomed and accepted by the independence movements, says historian Raffael Scheck from the University of Waterville in the US. Many liberation fighters criticized the veterans for having taken up the cause of the colonial powers and oppressors. Many veterans today are bitter. Although they contributed to the victory over fascism, they receive little recognition. “I get a monthly war pension of 5,000 Congo francs (4.8 euros, $5.4). That is not fitting for someone who represented Belgium’s interests,” said Albert Kuniuku. Reluctant to accept consequences [caption id="attachment_18168" align="alignleft" width="300"] 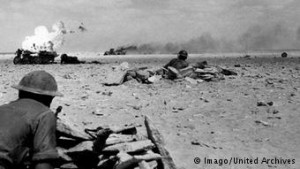 Africa soldiers fought against the German Wehrmacht in the Libyan desert[/caption] That the African war experience remains just a footnote in European – and especially in German – history books is, according to Rössel, partly due to the fact that the countries of Europe are reluctant to see any need to draw consequences. “If there is to be a serious attempt to deal with the past, then one must treat the descendants of our liberators in a different manner than is the case under present refugee policy,” Rössel says. “Compensation for the consequences of the war should be paid around the globe. But almost nowhere has postwar reconstruction taken place.” In 1946 Congolese soldier Albert Kuniuku returned home . For two years he had fought for the Allies against the Japanese. Asked if he is proud of his war service, he pauses. Tears roll down his cheeks. No, he says, he is not proud. The grief for his fallen comrades sits deep. Few of the 25,000 African soldiers who left with him for India came back. *Source dw.de/africa .Saleh Mwanamilongo in Kinshasa contributed to this article]]>