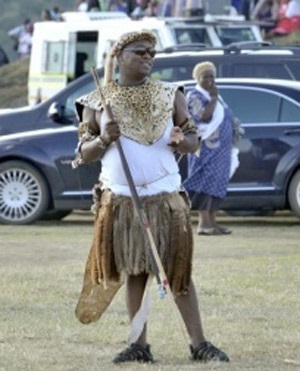 Edward Zuma (The Witness)[/caption] Durban – President Jacob Zuma‘s son, Edward, has come out in full support of King Goodwill Zwelithini’s controversial call to deport foreigners from South Africa. “We need to be aware that as a country we are sitting on a ticking time bomb of them [foreigners] taking over the country. “The reason why I am saying that is because some of the foreigners are working for private security companies where they have been employed for cheap labour. These companies are running away from complying with South African labour laws,” said the president’s eldest son. ‘Foreigners need to leave the country’

Zuma told News24 in an interview he fully agreed with Zwelithini’s sentiments that “foreigners needed to leave the country.” Zwelithini allegedly made the comments, which have sparked criticism, at a moral regeneration rally in Pongola, northern KwaZulu-Natal, two weeks ago. The Zulu king reportedly said that foreigners were changing the nature of South African society as they were taking advantage of the poorly behaved and undisciplined locals. Zwelithini was also quoted as saying, “We urge all foreigners to pack their bags and leave.” Despite the South African Human Rights Commission now probing the Zulu king’s utterances, Zuma junior said, as a citizen of South Africa, he fully agreed with the king. He said some foreigners didn’t have legal documentation permitting them to be in the country. Former soldiers a danger The time bomb, charged Zuma, was that some foreigners were carrying guns and some of them were soldiers in their home countries. “In South Africa you need to have a gun licence to be able to carry a gun. Where are their licences? We can’t rule out the possibility of a coup in the future. The government needs to clean out everyone that is in the country illegally. They need to leave,” said Zuma. He said foreigners were fuelling South Africa’s drug problem. “They are the reason why there are so many drugs in the country. They supply and sell the drugs to communities in our country. Take Radovan Krejcir for example, he came into the country because he knew he could commit crime and get away with it,” said Zuma referring to the Czech fugitive who has been charged, along with three others, for the murder of Lebanese national Sam Issa. “I am not only talking about foreigners from African countries, I am also talking about Asians and Europeans as well. They are a real security threat to this country and the police can’t catch them because they can’t be traced because some of them do not have proper documentation,” said Zuma. *Source News24]]>