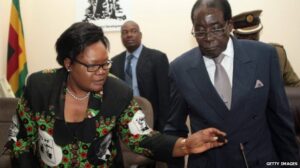 Joice Mujuru and President Mugabe were once close allies[/caption]

An expelled member of Zimbabwe’s ruling party says a new party will be formed to challenge President Robert Mugabe.

Didymus Mutasa told the BBC the new party would also be called Zanu but the initials PF would stand for “People First” not “Patriotic Front”. Zanu-PF expelled Mr Mutasa and other senior members after accusing them of plotting to oust Mr Mugabe last year. They denied the claim. Mr Mugabe, 91, is due to run for re-election in 2018. He has ruled Zimbabwe since independence in 1980. The BBC’s Brian Hungwe in the capital, Harare, says Mr Mugabe’s sacked deputy, Joice Mujuru, is tipped to lead the new party, following the biggest split in Zanu-PF in the post-independence era. The likes of Ms Mujuru and Mr Mutasa were veterans of the guerrilla war against white minority rule, and commanded a huge following in Zanu-PF, our reporter says. The ruling party will therefore be worried that the proposed new party could take support away from it in the next election, he adds. Ms Mujuru was known as “Spill Blood” during the guerrilla war, and served as Zimbabwe’s vice-president until last year. First lady Grace Mugabe, who is now a senior figure in the Zanu-PF, accused her of plotting to kill the president. She denied the allegation. Zanu-PF expelled her last week, accusing her of bringing the party into disrepute. *Source BBC  ]]>