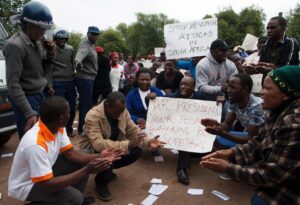 Zimbabwean citizens protest outside the South African Embassy in Harare, against a wave of violence against immigrants in parts of South Africa on April 17, 2015 (AFP Photo/Jekesai Njikizana)[/caption] Harare (AFP) – Zimbabwe will evacuate its nationals caught in anti-foreigner violence that has left six people dead in South Africa, the country’s ambassador told media Friday.

The country’s ambassador to South Africa Isaac Moyo said Harare will Sunday begin the repatriation of about 1,000 Zimbabwean citizens affected by the attacks in the eastern port city of Durban.

“Identification and processing of repatriation documents has already been done,” Moyo told the state-owned Chronicle newspaper.

There are some 250,000 Zimbabweans in South Africa, making them the biggest community of foreign nationals in the country.

Most Zimbabweans travelled to South Africa to escape the economic hardship that gripped their country after a wave of unrest in 2008.

On Friday, over a hundred people marched outside the South African embassy in the Zimbabwean capital, calling for an end to the violence.

“We, the people of Zimbabwe standing in solidarity with our brethren in Africa, strongly condemn and denounce the cruel, senseless and gruesome xenophobic slaughter of foreign nationals and the looting of their properties in South Africa,” read a petition signed by 15 civil society groups.

“Why (are they) killing them? They came in peace”, “One Africa for all Africans” and “Save our brothers and sisters from xenophobia” read some of the placards at the Harare protest.

The violence started in Durban three weeks ago, after Zulu King Goodwill Zwelithini was reported last month to have said foreigners should leave the country. He has since claimed he was misinterpreted.

Durban has a large number of Zulu speakers loyal to the king.

More than 1,000 people have been forced by the wave of violence to seek safety in camps.

Mozambique and Malawi have also announced they would help their citizens return home.