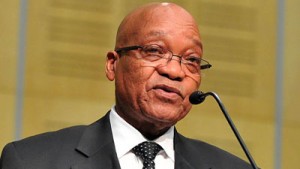 Jacob Zuma[/caption] SOUTH AFRICA President Jacob Zuma Monday lashed out at Africa governments who “criticise the South African government but their citizens are in our country”, even he took a firm stance against stance on the wave of xenophobic violence that has gripped the country. Addressing the public on Freedom Day at  the Union Buildings South Lawn, Zuma chastised governments who have criticised the South African government for the violence that has claimed seven lives. “As much as we have a problem that is alleged to be xenophobic, our sister countries contribute to this. Why are their citizens not in their countries and are in South Africa?” he asked. This comes in the wake of Nigeria recalling its ambassador to South Africa in protest at the xenophobic violence. Nigeria has summoned Acting High Commissioner Martin Cobham and Deputy High Commissioner Uche Ajulu-Okeke “for consultations” over the “ongoing xenophobia”, Minister of Foreign Affairs Aminu Wali said in a statement on Saturday. Zuma said a frank conversation on illegal immigrants needed to take place within the Southern African Development Community (SADC) as well as the African Union. Zuma mentioned the murder of Mozambican citizen Manuel Jossias—first identified as Emmanuel Sithole—in the Alexandra township. “He used a false name to avoid detection by authorities as he was an illegal immigrant,” he said. Zuma paid tribute to the three South Africans who were killed in the attacks in Durban: Ayanda Dlamini, Msawenkosi Dlamini and Thabo Mzobe, who was 14 years old. He said South Africans were angry, adding; “We need to be cured, we are sick”. “The latest outbreak of violence necessitates more comprehensive action from all of us to ensure that there is no recurrence. We have to address the underlying causes of the violence and tensions, which is the legacy of poverty, unemployment and inequality in our country and our continent and the competition for limited resources,” Zuma said. South Africans need psychological cure He also spoke at length of how violent South African communities are, adding that “we need a psychological cure”. “Apartheid was a violent system and it produced violent countermeasures to it. So people still believe that to fight authority you must fight government … even now, when it is your own government. We need to be helped as a society,” he said. “They get excited. They burn the tyres; they block the roads; they destroy property; exercising their rights but interfering with the rights of many.” Zuma then lashed out at the Economic Freedom Fighters and their trademark militancy  in Parliament. “Look at the institution that is said to be the apex of democracy, Parliament. Look at the politicians whom you have voted for, how angry they are. How defiant they are, even in Parliament,” he said to thunderous applause. Zuma said Parliament and the office of the Speaker should be respected. He was taking exception to the behaviour of EFF Members of Parliament who often disobey the orders of the Speaker in the national assembly. “If the Speaker says ‘Out of my house’, you must get out. But what do some of the members of Parliament do when the Speaker says ‘Sit down’, they say ‘Speaker, I want to address you’. They will continue addressing the speaker. If the speaker says ‘Withdraw’ they say ‘I won’t withdraw’. If the speaker says ‘Out’ they say ‘I won’t go out’,” Zuma told the crowd. He said this was a glaring example of what he called the “violent culture of apartheid”. “Imagine if politicians are so angry then who will rule the country.” *Source Mgafrica  ]]>