Everyone in South Africa – citizens and foreigners alike – should be worried by the recent spate of attacks on black foreigners that started in KwaZulu-Natal and have subsequently spread to other parts of the country, says social anthropologist Professor Francis B Nyamnjoh [caption id="attachment_17603" align="alignleft" width="300"] 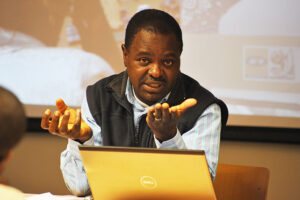 Francis B Nyamnjoh is a professor of social anthropology at the University of Cape Town.[/caption] It is most unsettling that South African political leaders and policy makers are not doing enough to encourage South Africans to disabuse themselves of the illusion that their problems can be solved through the logic of exclusion and scapegoating of certain types of foreigners that has pervaded, paradoxically, since the dawn of democracy in 1994. What is happening in Durban and KwaZulu-Natal reawakens a monster that political leaders and policy makers should have sought a way to bury for good after the xenophobic violence of 2008. Everyone in South Africa – citizen and foreigner alike – should be worried by the eruptions in Durban that are now spreading to other parts of the country. The logic of ever diminishing circles of inclusion dictates that the next amakwerekwere, foreigners or strangers, is always one layer below the obvious one. This was made quite evident in a song by popular Zulu musician, Mbongeni Ngema, released in May 2002, which has been banned from public broadcast. Titled AmaNdiya, the controversial song claims to “begin a constructive discussion that would lead to a true reconciliation between Indians and Africans”, and accuses South African Indians of opportunism and of enriching themselves to the detriment of blacks. In the song Ngema goes on to say that if the Indians are to be taken seriously as belonging to South Africa, they must display greater patriotism and stop straddling continents. Implied in his song is that the Indians risk losing their South African citizenship should they refuse to change their ways. And if and when the Indians are gone in this bizarre nativity game of exclusionary violence and South Africa’s problems are still unsolved, who is next? If the Kill the Boer song, the row over Premier Helen Zille’s tweet on economic migrants from the Eastern Cape in the Western Cape and the Rhodes Must Fall movement are anything to go by, your guess is as good as mine who the next layer of “outsiders within” would be. This regressive logic and the scapegoating of perceived outsiders is also well captured by the Nando’s diversity advert released in June 2012. The advert articulates an idea of identity and belonging in South Africa that is both conscious and cognisant of the histories of mobilities of peoples that have made South Africa possible, and that remains open to new and ongoing mobilities. Like other Nando’s advertisements, the diversity ad is very provocative and ambiguous, and it understandably elicited mixed reactions, including a ban from being broadcast by the SABC. The ad starts with black Africans illegally crossing a barbed-wire border fence into South Africa. There is a voiceover and each time the voice calls out a name, the group of people who represent that particular identity are transformed into a cloud of smoke, as follows: You know what is wrong with South Africa: all you foreigners. You must all go back to where you came from – you Cameroonians, Congolese, Pakistanis, Somalis, Ghanaians and Kenyans. And of course you Nigerians and you Europeans. Let’s not forget you Indians and Chinese. Even you Afrikaners. Back to Swaziland you Swazis, Lesotho you Sothos, Vendas, Zulus, everybody. In the end, only one person is left standing, a San man who, armed with a bow and arrow and ready to explore the wilderness, confronts the voiceover with these words: “I’m not going anywhere. You found us here.” The ad concludes with the voiceover saying: “Real South Africans love diversity. That’s why we have introduced two more items: New peri-crusted wings and delicious Trinchado and chips.” To my mind, far from promoting xenophobia, this ad is challenging narrow and parochial identities, or ideas of being and belonging as a zero-sum game. It is against prevalent regressive logics and ever-diminishing circles of being South African in a world characterised by the flexible mobility of people. It invites us to contemplate what it is to be South African, if every colour of its current rainbow configuration must go back to their Nazareth and be counted. If belonging is articulated in rigid exclusionary terms, where everyone however mobile, is considered to belong to a particular homeland somewhere else, a place they cannot outgrow and which they must belong to regardless of where they were born or where they live and work, then South Africa can only belong to one group of people, those who were there before everyone else: the San. They, who know only too well that they are the bona fide sons and daughters of the South African soil and its resources – the only authentic South Africans. The immigration policies and practices of the South African state, as well as the xenophobic attitudes of some South Africans, contradict the rhetoric of inclusivity, human rights and ties to the rest of Africa that proliferate in official pronouncements and civil society discourses. Yet we are reminded by ethnographies of everyday lives and living that being and belonging is a permanent work in progress – open-ended, complex and nuanced. It is the duty of South African leaders (political, economic, cultural, intellectual, and others) and media to make this abundantly and repeatedly clear to all and sundry. Good leadership does not go to sleep between eruptions. * Source UCT.Francis B Nyamnjoh is a professor of social anthropology at UCT with ties to the Council for the Development of Social Science Research in Africa (CODESRIA).]]>