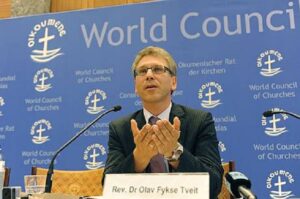 Rev. Dr Olav Fykse Tveit, general secretary of the WCC[/caption] The World Council of Churches (WCC) has taken a clear stand against recent violent attacks against migrants in South Africa, reaffirming churches’ positions against racist, ethnocentrist and xenophobic acts of violence. Noting the special vulnerability of migrants and migrant workers, a statement issued in Geneva on 24 April by the general secretary of the WCC urges leaders in South Africa, as well as in other countries in the region, to promote the observance of human rights at all times. Rev. Dr Olav Fykse Tveit, general secretary of the WCC, commented that “The spasm of violent attacks against migrants in South Africa has a special poignancy, in light of South Africa’s historic leadership in fighting against racial discrimination and exclusion.” “The victims of these attacks represent the same neighbouring countries and people who stood with the marginalized majority of South Africans during the dark days of the Apartheid era,” Tveit observed, and he asked, “Where is the recognition of that African solidarity, and the commitment to the philosophy of ‘Ubuntu’?” “We urge the South African government to demonstrate leadership to bring the situation under control and promote the observance of human rights and adherence to the standards and norms as contained in international human rights instruments,” stated Tveit. “We are in solidarity with all the affected individuals and their families, and call for their protection, restitution, and for the criminal accountability of those responsible for the attacks against them,” he added.]]>