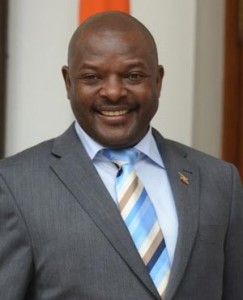 Washington – The United States has condemned Burundi President Pierre Nkurunziza’s controversial bid for a third term in office, warning that the central African country “is losing an historic opportunity to strengthen its democracy. “We regret this significant missed opportunity, but the hard work of building democratic practices and institutions must continue,” acting state department spokesperson Marie Harf said, accusing the ruling party of disregarding the term-limit provisions of the Arusha Accords. Back into violence “In that spirit, we urge all parties to participate in the legislative and national elections and ensure these electoral processes are inclusive, transparent, credible, free and conducted in an environment without threats, intimidation, or violence.”

Burundi only emerged from civil war in 2006 and there are fears that Nkurunziza’s effort to cling to power could push the nation back into violence. Opposition and civil society groups in Burundi have branded Nkurunziza’s bid to run again as an unconstitutional violation of the Arusha Accords that ended the 1993-2006 civil war.   “We specifically call on the Burundian government to respect the rights of all peaceful political parties and their candidates to campaign, hold meetings and rallies and express their views,” Harf said in a statement, hinting Washington was prepared to act if necessary. Civilian population “The United States will continue to monitor the situation in Burundi closely and take targeted measures, including, where appropriate, by denying US visas, to hold accountable those individuals who participate in, plan, or order violence against the civilian population,” she said. “Violence has no place in democratic elections, and perpetrators of such violence will not be welcome to travel to the United States and risk being held accountable in a court of law for any crimes for which they are responsible.” *Source AFP/News 24]]>