Somalia is a country ravaged by political instability, internal strife and abject poverty – an ideal breeding ground for piracy. But the short term gains that have filtered through the economy from ransom payments have done little to address the country’s long term economic health. 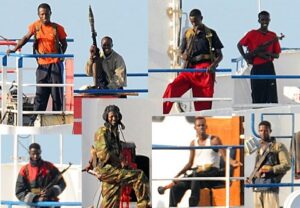 In 2011, Somali pirates accrued more than US$163 million in ransom payments after hijacking foreign ships transiting the Gulf of Aden. That sum represents just a slice of the estimated US$2.1 trillion in wealth from transnational organized crime flowing into the global economy each year. Granted, the ransoms were paid at the peak of piracy, which has slowed in recent years due to improved surveillance and security, but ill-gotten gains from piracy, narcotics and kidnapping still represent a huge chunk of revenue in fragile states beset by poverty, inequality and high unemployment. Just what impact has piracy had on economic development in Somalia? Dr Ryan Jablonski, an Assistant Professor in Political Science from LSE’s Department of Government, and Drs. Steven Oliver and Justin Hastings from Singapore and Australia have spent the past three years looking at this question. In a study of ransom payments made by ship owners and insurers to Somali pirates from 2005-2013, Dr Jablonski and his colleagues found compelling evidence that pirate activity has undermined the long-term economic development of Somalia in ways not previously realised. Ransoms injected a huge amount of money into the economy in a very short period, creating significant demand for non-tradable goods and services and leading to an overvaluation of the Somali currency.  In what is often referred to as a “Dutch Disease”, these ransom payments undermined Somalia’s trade competitiveness and encouraged people to work as pirates or in the booming non-tradable sector. “The outcome was that Somalia became more politically and economically dependent on ransom payments because the export-competing pastoral sector was suppressed by the appreciation of the local currency,” Dr Jablonski explains. Local residents who benefited from the proceeds of piracy were also caught in a no-win situation, becoming reliant on ransom income and creating a ‘Robin Hood-like’ effect where pirates are seen as heroes rather than criminals. “In the case of Somalia, the ransom income provided a major boost to businesses that cater to pirates, such as drug traffickers, construction workers, cooks, prostitutes and vehicle importers. The economic spill overs for coastal towns in particular were considerable.” At the height of piracy activity, corruption was rife within Somalia, with local officials and clan leaders known to protect pirate groups in exchange for payoffs. In 2013, the World Bank estimated that more than $300,000 of each ransom payment was spent on bribes to businessmen, clan leaders, village elders and politicians. All these factors undermined efforts to stamp out piracy, Dr Jablonski says, despite protests from some areas of Puntland (the Somalian base for most pirates), where piracy resulted in higher food prices, inflation and reduced legal employment options. The same year that ransom payments totalled US$163 million (2011), livestock exports through the Bosaso port brought in $113 million. “Considering that earnings from livestock exports represent an estimated 80% of the region’s export revenue, piracy was undoubtedly an important source of foreign capital as well as a driver of economic activity for the region,” Dr Jablonski says. While piracy stimulates consumption and investment, its gains are short term, the research shows. Ransom payments weakened trade competitiveness and undermined Somalia’s export of cattle, camels, sheep and goats to markets in the Arabian Peninsula. The fact that pirates spend a lot of their ransom money on imported goods (equipment, weapons and engines for future piracy operations), real estate, alcohol, cars, drugs and non-tradable services also perpetuates a negative economic cycle. Dr Jablonski’s research shows that a $9.5 million ransom payment appreciated the value of Puntland’s currency relative to the US dollar by 11%. The knock-on effect resulted in exports falling by 25% or nearly $1.5 million per month. Likewise, imports such as rice, wheat and sugar increased by about $2.9 million. Because pirate groups usually lack state protection for the ransom transactions they are also forced to finance their own militias, placing them in direct competition with the state, often leading to an erosion of state control over the economy and territory. “This was certainly the case for pirate havens in Eyl and Galkayo,” Dr Jablonski says. “The former president of Galmadug is quoted as saying: ‘Pirates have more militias, more vehicles and more money than we do. No-one can fight them at sea and neither can we fight them on land.’ ” Somalia is not alone in getting caught in the web of transnational crime. Other fragile, developing states have set a precedent, including Colombia in the mid-1990s, when rising cocaine production corresponded with a booming construction sector and reduced coffee exports, a decline in agriculture and an overvalued peso. A similar situation happened in Guinea-Bissau. Opium poppy cultivation may have accounted for as much as 35% of Afghanistan’s GDP in 2007 and brought in an estimated $140 billion per year to Burma in the 1990s. Foreign aid, in comparison, accounts for a fraction of these sums. “Illicit capital appears to have displaced labour, appreciated exchange rates and inflated prices in several of these economies, with negative developmental consequences,” Dr Jablonski says. “It creates a vicious cycle, leading to poverty, corruption and a dependency on criminal activities that is hard to shake.” *Source LSEDr Ryan Jablonski is an Assistant Professor of Political Science in the Department of Government at the London School of Economics and Political Science. His research is focused on international development, the impact of foreign aid, electoral violence, transnational crime and maritime piracy. His research has been published in World Politics, Journal of Conflict Resolution, British Journal of Political Science and World Development.]]>