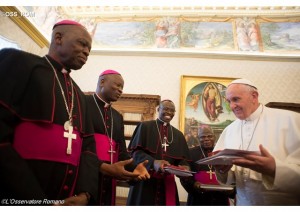 Pope tells Benin Bishops to promote interreligious dialogue[/caption] The vitality of the Church, the pastoral ministry of the family, attention to priests and persons religious, and relations with the civil authorities are the central themes of the written discourse that the Pope handed to the bishops of the Episcopal Conference of Benin this morning, at the end of their “ad Limina” visit. The Holy Father begins by praising the dynamism of parish life, the extensive participation of the faithful in ceremonies and the increase of vocations to the priesthood, but he also echoed the prelates’ reports that it is at times superficial and lacking in solidity and strength. “Therefore, it is important that the desire for a profound knowledge of the Christian mystery not be the prerogative of an elite, but instead must inspire all faithful, as everyone is called to holiness. It is imperative that the Church in Benin resists and defeats the winds to the contrary that are rising throughout the world and do not fail to blow upon you too. I know that you are vigilant in the face of numerous ideological and media attacks. The spirit of secularisation is at work in your country too, although it is not yet very visible. Only a faith profoundly rooted in the heart of the faithful, and lived in a concrete way, will enable you to face this”. One of the challenges to the Church in Benin is family pastoral ministry, to which the upcoming Synod will seek to respond. The Pope thanks the prelates of Benin for their prayers for this assembly, and for their mobilisation of the dioceses to participate in such important event. “I can only encourage you to continue with determination in the efforts you have undertaken to support families, both in their faith and in their daily life. I know that the pastoral ministry of marriage remains difficult, considering the real social and cultural situation of the people. However, do not be discouraged, but persevere tirelessly as the family in defence of the Catholic Church is a reality willed by God; it is a gift of God that brings joy, stability and happiness to people and to societies. It is an important challenge since the family, as the basic unit of both society and of the Church, is the place where authentic human and Gospel values are transmitted”. The bishop of Rome then turns to the theme of the education of the younger generations, who must bring solidarity, justice and mutual respect to the society of the future. “It is necessary to promote in your country – without of course renouncing any of the Truth as revealed by the Lord – the encounter between cultures and dialogue between religions, especially with Islam. It is well known that Benin offers an example of harmony between the religions present in her territory. It is however wise to be vigilant, considering the current world climate, in order to conserve this fragile heritage. I am particularly pleased that an international colloquium on interreligious dialogue has been held, under the presidency of Cardinal Tauran, which was widely appreciated”. “Your local Churches have a key role in promoting harmony and justice in the progress of the country”, Pope Francis observes. “But it is a role they also play in healthcare and human development. How much work is carried out in the name of the Gospel in your dioceses! While the global crisis is affecting many countries, it is necessary to go against the grain with courage, fighting against the throwaway culture that reaches everywhere and spreading the Gospel values of hospitality and encounter. The service of charity is a constitutive dimension of the mission of the Church, and it is an expression of her essence. However, it should be borne in mind that the spirit of the works accomplished by the Church has a specific nature that must be clearly identified: she never acts as a form of simple social aid, but rather as the manifestation of the tenderness and mercy of Jesus Himself, who tends to the wounds and weaknesses of His brothers. The joy of the Gospel is thus announced to humanity in the most effective way”. The Pope thanks the priests of Benin for their generous service into the Gospel and mentions again the great number of vocations, a blessing from the Lord, and encourages the Church in Benin to share her resources with the Churches of other regions which are lacking. However, he writes, “when you send your priests to study or on missions elsewhere, do so with judgement, without forgetting the needs of your own Churches”. The final paragraphs of the text are dedicated to the good relationship between the Church and the civil authorities in the country. “The voice of the Church is listened to and her action is appreciated. I invite you to continue to take your place fully in the public life of the country, especially in these times. I know you are engaged in constant work to encourage relations between the different components of society. I invite you to continue along this path, taking care not to enter directly into the political arena or party disputes. The conduct of public affairs remains the duty of the laity, whom you have the important duty of ceaselessly educating and encouraging”.   *VIS/APO]]>