A palace for each of his six wives and £155,000 just on military uniforms for his 28 children: Jaw-dropping life of Zulu King is blamed for sparking South African bloodshed by branding immigrants ‘lice’ 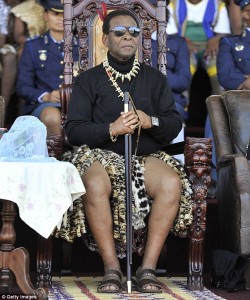 Controversial: King Goodwill Zwelithini (pictured) has been blamed for sparking the xenophobic riots which has left at least seven dead in the last couple of weeks as it spreads from Durban to Johannesburg[/caption]

The Zulu king blamed for sparking the violence against foreigners which has seen South Africa’s streets turn into battlefields running with blood over the past two weeks is no stranger to scandal.

It was just a couple of years ago that King Goodwill Zwelithini – who last month said foreigners should ‘pack their belongings’ and leave – labelled homosexuals as ‘rotten’.

The dyed-in-the-wool traditionalist has also courted the wrath of women’s rights and HIV/Aids campaigners for his hardline stance on controversial traditional virginity testing.

King Zwelithini resurrected the outdated custom, in the face of widespread opposition, by claiming it helped the country’s fight against HIV/Aids.

But more recently, there was the revelation that he was bankrupt – despite the 54million rand (£3million) handed to him from the South African government to keep the 67-year-old, his six wives and 28 children in the style to which they are accustomed.

And, as a man who likes to spend more on his birthday cake than many of his subjects earn in a lifetime, it is quite some lifestyle.

While King Zwelithini continues to enjoy all the trappings of his royal status, South African authorities arrested 11 men in Johannesburg late on Tuesday suspected of involvement in violence against immigrants, local television news reported.

The men were held during a joint raid by the police and army on a Johannesburg hostel.

A wave of anti-immigrant violence has so far claimed seven lives in trouble spots in Durban and Johannesburg, to where the government announced the deployment of defence forces on Tuesday.

A speech given by the King in Durban last month, denouncing foreigners as ‘ants’ and ‘lice’ who should leave the country, has been blamed for sparking the violence.

The hellish scenes across townships in South Africa are a far cry from King Zwelithini’s opulent marriage to his sixth wife Zola Mafu, a 28-year-old princess from the neighbouring kingdom of Swaziland, in July, which included a marquee, catering and flowers for 5,000 invited guests.

Maintaining all six wives, their children and grandchildren in separate palaces, with generous allowances, private school fees and a retinue of personal staff, requires substantial funding, according to reports.

And he decided they all needed new, imported military regalia to wear to the opening of KwaZulu Natal’s state legislature later this year – at the not insignificant price of £155,000, the Times claimed.

But that is not to say the King, who became leader of South Africa’s biggest tribal group aged just 20 in 1968, does not have previous form on exorbitant expenditure.

In 2012, King Zwelithini asked for half a million pounds for a new palace for Queen Mafu – as well as an extra million pounds on fifth wife Queen MaMchiza’s home, in Nongoma, which boasts five royal residences.

Four years before, the royal family had come under fire for spending more than £16,000 on linen.

And just last month, the Sunday Times reported that the King had bought each of his queens a new Mercedes-Benz E-Class sedan, in addition to a seventh model ‘as a back up’. 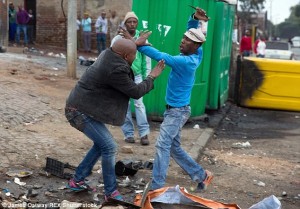 Horrific: The brutal murder of Mozambican man Emmanuel Sithole in a township near Johannesburg was captured on camera. Zwelithini has been blamed for sparking outbursts of xenophobic violence like this[/caption]

The monarch’s opulent lifestyle is in stark contrast to millions of South Africans who, more than two decades after winning freedom, still do not have access to basic services such as clean water and electricity.

But despite opposition politicians hitting out at the huge amounts lavished upon King Zwelithini and his family, it is unlikely to change.

As South Africa celebrates 21 years of democracy next week, the largesse enjoyed by the king at the taxpayers’ expense appears assured – at least while controversial president and fellow Zulu Jacob Zuma clings to power.

Mr Zuma, who himself has four wives and at least 20 children, has relied on the influential leader to deliver political support, both to him personally and the governing ANC.

In return, the king enjoys a budget far higher than South Africa’s other royal households and chiefdoms.

Indeed, the South African government waved through an extra two million rand (£110,600) just last month, to help him get to the end of the financial year.

And none of this takes into account the amount the South African taxpayer is having to shoulder thanks to the inflammatory speech he gave in March.

‘We ask the foreign nationals to pack their belongings and go back to their countries,’ he said during the speech in Durban.

King Zwelithini has blamed bad reporting for his alleged hate speech, yet his attempt to call for calm this week contained a clear, but rather chilling hint at the power the firebrand believes he wields over his predominantly impoverished, young followers.

He told a crowd of 10,000 that if he had really ordered people to be killed ‘this country would be reduced to ashes’.

Even so, the South African government has been forced to declare ‘an emergency’ over the issue, ordering troops onto the streets of its most volatile townships where disaffected locals have been ransacking shacks in search of migrants they accuse of stealing job and business opportunities.

At least 7,000 foreigners are sheltering in camps for their safety and more than 900 have fled, including to Zimbabwe where despot Robert Mugabe’s government has likened the monarch’s alleged remarks to those made in the run up to the genocide in Rwanda 20 years ago