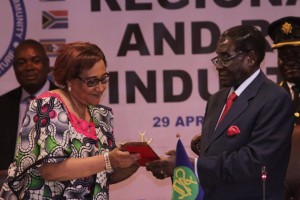 Zimbabwean President Robert Mugabe, right, hands over a ceremonial key to SADC Excecutive Secretary Stergomena Lawrence Tax during the official opening of the Southern African Development Community(SADC) Heads of State and Government Extraordinary Summit on Industrialisation in Harare, Wednesday, April, 29, 2015. The summit was called by heads of state in an effort to craft a strategy for industrialisation in the region through value addition and beneficiation of abundant natural resources in Africa. (AP Photo/Tsvangirayi Mukwazhi)[/caption] HARARE, Zimbabwe (AP) — Southern African leaders met in the Zimbabwean capital Harare on Wednesday to discuss how to maximize profits from their countries’ natural resources.

Heads of state of the 15 countries that make up the Southern African Development Community came together, marking the official opening of the summit that began on Monday when cabinet ministers gathered.

In meetings before the summit, officials presented a strategy to achieve economic growth by exploiting mineral resources through industrialization.

“The potential benefits we stand to reap are immense,” said Zimbabwean President Robert Mugabe in a 15-minute opening speech.

About 70 percent of southern Africa’s population lives in poverty, Mugabe said. Most southern African countries are rich in minerals such as gold and diamonds, while Angola is the second largest oil producer in sub-Sahara Africa, behind Nigeria. The majority of these resources are exported in their raw form, Mugabe said.

Officially named the Regional Strategy and Roadmap for Industrialization, the plan to modernize southern Africa is meant encourage economic growth until 2063. Analysts say the plot is ambitious because of the wealth gaps and policy differences between countries.

South African President Jacob Zuma, whose country has the largest economy in the group, recently blamed the political and economic conditions in nearby nations for the influx of immigrants into his country.

The recent spate of attacks on foreigners in South Africa was not on the official agenda for discussion, but Mugabe did comment on efforts to return Zimbabwean immigrants during a press conference. He said the Zimbabwean government sent free buses to repatriate citizens during the attacks, but only about 800 chose to leave South Africa.

“We, the neighbors, must do what we can to prevent more people into South Africa and get those in South Africa to get back home,” he said, adding that industrialization would make southern African nations “equally attractive.” *Source AP/Yahoo]]>