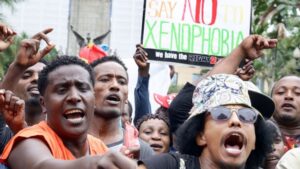 Hundreds of people marched against the anti-immigrant violence that has hit Durban[/caption] South African police have arrested 17 people and opened murder cases after attacks on foreign nationals in Durban. The violence comes in the wake of alleged comments by the Zulu king telling migrants to go home – although the he says he was mistranslated. But Home Affairs Minister Malusi Gigaba has called on traditional leaders to stop making remarks that “could result in a loss of life”. At least 62 people died in xenophobic attacks that swept the country in 2008. Following the alleged comments by King Goodwill Zwelithini at the end of March, 250 people have been attacked, mostly from the Democratic Republic of Congo, and foreign-owned shops have been looted in the port city of Durban. More than 1,000 mainly African migrants have fled their homes, some going to police stations and other are being housed in tents on a sports field. South Africa’s Business Day newspaper reports that at least three people have been killed and that a Somali shopkeeper is in a critical condition. Police spokesperson Maj Thulani Zwane told the BBC that the police do not know exactly how many people have been killed, but that some were South African nationals and some were foreigners.

South African President Jacob Zuma’s son, Edward, has come out in support of the Zulu king’s alleged comments “We need to be aware that as a country we are sitting on a ticking time bomb,” he said, adding that foreigners were “taking over the country”. [caption id="attachment_17411" align="alignright" width="300"] 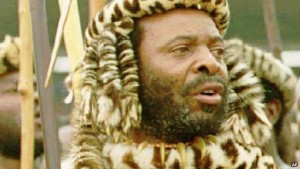 Zulu King Goodwill Zwelithini, like other traditional leaders, is widely respected[/caption] Raphael Baheybwa-Kambambire, president of Congolese Solidarity campaign, told the BBC that religious leaders met with Zulu monarch on Thursday. King Zwelithini told them he was talking “only about those who don’t have papers and documentation in South Africa”. Mr Gigaba said on Thursday evening that it was important not to incite violence. “Africa in particular must not think that we hate fellow Africans so much that we are prepared to do the worst to cause them harm,” he said. On Wednesday, hundreds of people marched in front of the Durban’s City Hall in protest against the xenophobic violence. Durban-based journalist Jeff Wicks told the BBC’s Newsday programme that it does not take much to stoke tensions. Xenophobic violence flares up in townships where living conditions are poor for all those living there, irrespective of where they come from, he says. *BBC  ]]>