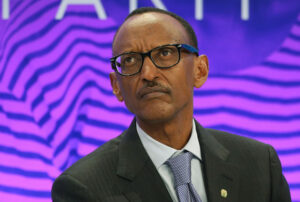 Kagame’s Rwandan Patriotic Front fought Hutu extremists into Congo in 1994 after they had slaughtered 800,000 mainly ethnic-Tutsi Rwandans. The U.S. cut military aid to Rwanda on accusation by the Congolese government and the UN’s independent Group of Experts on Congo that Rwanda was backing militias in Congo, an allegation denied by Kagame.

The East African nation’s economy expanded as renewed foreign aid opened up new sources of funding for the government, which was reliant on the domestic debt market. Growth averaged 7.8 percent in the decade to last year, according to the International Monetary Fund, better than the sub-Saharan African average over the period of 6 percent. While championing the economy, Kagame has been criticized by groups including Human Rights Watch and Amnesty International for stifling opposition. His government has denied accusations it backed Congolese insurgents. Yields on 91-day Treasury bills reached a record high of 12.76 percent in January 2013 amid foreign pressure on Rwanda.

Three-month borrowing costs dropped 97 basis points, or almost 1 percentage point, this year, to 3.44 percent at the latest auction on April 9. The spread between Rwanda’s $400 million of debt due May 2023 and similarly dated Treasuries narrowed to 442.8 on April 10, the lowest in a month. Yields on the Eurobonds dropped nine basis points this year to 6.31 percent on Monday. Rwanda was ranked 46th in the world this year by the World Bank’s Doing Businesssurvey, the third-best in sub-Saharan Africa and ahead of Kenya and Nigeria. Inflation was 0.8 percent in March, little changed from a month earlier, as lower oil prices reduced the import bill, a quarter of which is taken up of fuel costs. “The country’s business-friendly policies and favorable regulatory environment make Rwanda an attractive entry point” into East Africa, Jacques Nel, an economist at NKC Independent Economists, based in Paarl, South Africa, said by e-mail on April 10. “The government’s current economic strategy has the clear priority of removing impediments to private-sector development.”

While Kagame has been credited with putting pro-investor policies in place, he’s been criticized for silencing dissent. Last year, South Africa expelled four of Rwanda’s diplomats over an alleged attempt to kill an exiled former army general, after the country’s former head of intelligence was found dead in a hotel room in Johannesburg. Opposition leader Victoire Ingabire had her jail sentence extended to 15 years in December 2013 after being found guilty of conspiring against the government, threatening state security and inciting people against the state. Parties that have tried to challenge the RPF “have been got rid of one-by-one,” Carina Tertsakian, a London-based senior researcher for Rwanda and Burundi at Human Rights Watch, said by phone on April 10. “It’s actually very, very difficult for opposition parties to function in a meaningful way,” she said. “In reality, the situation in Rwanda cannot be described as democracy in the true sense of the term.”   Still, with an election two years away, the prospect of changing the country’s constitution to allow for a third Kagame term may be “a good thing” for the stability it offers to the coffee-producing country, according to NKC’s Nel. NKC sees possible replacements for Kagame are Defense Minister James Kabarebe and Foreign Minister Louise Mushikiwabo, he said. “Both have Mr Kagame’s authoritarian instincts without his constructive vision,” Nel said. “We see another five years with him at the helm as a positive thing.” *Source Bloomberg]]>