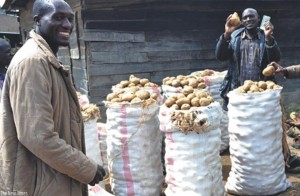 Dealers wait for a vehicle to transport Irish potatoes. A wholesale market for Irish potato will be set up in Kigali.[/caption] A number of countries, including Zambia and South Sudan, have expressed interest in Rwanda’s Irish potatoes, a development that could turn around the fortunes of farmers and expand the country’s exports base and revenue. Francois Kanimba, the Minister for Trade and Industry, said farmers must now double their efforts to satisfy the growing local and regional demand for Irish potatoes, and ensure quality along the value chain. Kanimba was addressing farmers and traders during a breakfast meeting organised by Private Sector Federation’s (PSF) Chamber of Agriculture. He, however, did not say whether any export deals had been reached with the two countries. “It is critical for farmers to focus on producing for the export market because that’s when you will benefit more from your efforts,” he said. Kanimba also revealed that the government and PSF will soon set up a wholesale market for Irish potatoes in Kigali to ease market access for farmers. “This will help remove middlemen, who have been exploiting farmers,” the minister said. Kanimba was optimistic the market will raise morale among farmers since they will be assured of a ready market. The market, to be built in Gisozi sector, will serve as a selling point for Irish potatoes in the City of Kigali. It is also one of the initiatives geared at promoting export trade, the minister added. Christine Murebwayire, the Association of Rwanda Farmers chairperson, said the market will organise both farmers and traders, noting that it will also help promote Irish potato export trade. Murebwayire, also the Chamber of Agriculture chairperson, however, noted that farmers still lack access to quality seeds, fertilisers and finance, besides being exploited by middlemen. Yvette Mukarwema, the chief operations officer at PSF, said the wholesale market will tackle challenges, like price uncertainty, which farmers have endured for years. She added that PSF’s partnership with government will improve the industry. Other initiatives Collection centres will be created at cell and sector levels, while selling points will be set up in the major Irish potato producing areas to ensure proper linkages between farmers and buyers, according to Kanimba. The minister added that there will also be committees at all levels of the value chain, which will file weekly reports for given collection and selling centres and monitor quality. Last year, both government and the Federation of Irish Potatoes Traders in Kigali signed an agreement to harmonise the Irish potatoes trading practices in the country. The deal aimed at regulating potato trade to reduce losses that were faced by farmers. Irish potatoes are one of the country’s staple food crops, with the Northern and Western province as main producers of the crop.   It is one of the priority crops that have been identified by the Ministry of Agriculture for value-addition. *Source NewTimes]]>