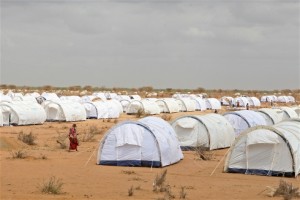 Photo: John Ndiku/OCHA
Some 350,000 refugees live in eastern Kenya’s Dadaab complex[/caption] DADAAB, Kenya, 13 April 2015 (IRIN) – A threat from Kenya’s deputy president to send back hundreds of thousands of Somali refugees in the wake of the Garissa university shooting has prompted alarm in the camps and rebuke from advocacy groups and even some MPs. It may not reflect government policy, but William Ruto declared on Saturday in a televised speech: “We have asked the UNHCR [the UN Refugee Agency] to relocate the refugees in three months, failure to which we shall relocate them ourselves.” Ruto was speaking nine days after at least 147 people, mostly students, were murdered in a university campus in an attack claimed by al-Shabab, a mostly Somali insurgent group that also has a significant Kenyan membership. Some 350,000 Somali refugees live in the Dadaab complex in eastern Kenya, about 100 kilometres from the Somali border. Kenyan officials and MPs accuse al-Shabab of training and recruiting militants inside the camps, which were set up in the early 1990s to accommodate refugees fleeing Somalia’s civil war. Shortly after the Garissa slaughter, the Kenyan government suspended the licences of 13 money remittance firms as a counter-terrorism measure. Many refugees in Dadaab rely on such firms to receive money from friends and relatives. It is unclear whether Ruto’s speech was backed by an actual plan formulated by the Kenyan government. Both UNHCR and the Somali government say they have had no formal communication about a large-scale repatriation. Kenya’s own commissioner for refugee affairs, Harun Komen, told IRIN he had not received any official directive so was therefore unable to comment. If such a repatriation did take place, “we would find it a big challenge,” UNHCR spokesman Emmanuel Nyabera told IRIN. He pointed out that Kenya had undertaken, in a tripartite accord signed with Somalia and UNHCR in late 2013, to ensure all returns would be voluntary. “Most refugees come from southern and central parts of Somalia and some of these areas are still unsafe. We can only facilitate returns when refugees can go back in a safe and sustainable manner,” he said. About a million Somalis are internally displaced within their own country, mostly as a result of insecurity. Nyabera added that all three parties to the agreement have been taking part in follow-up meetings geared towards the establishment of a tripartite commission. Somali Foreign Minister Abdisalan Hadliye said his government had received no official word about a repatriation. “If it is true, (it) will be very serious,” he told BBC radio. “It will be against the intentional law, it will be against the human rights, it will be against the agreement we have with the Kenyan government and the [one] UN has with the Kenyan government.” Abdulahi Osman, who chairs a refugee committee in Ifo, one of the Dadaab camps, urged the Kenyan government to reverse any such decision if it had been made. “We fled from war and still there is war,” Osman said. “The government should look into the humanitarian side. We share the pain [of the Garissa attack] with the Kenyan government and we are sorry about what has happened. The reality is we have to find the real culprits.” Fatuma Yussuf, who runs a small business in Dadaab, said Kenya should not force the refugees away after sheltering them for 25 years, especially as there was nothing for them back in Somalia. “We love our country, that is where the heart is. But the question is, why are we not returning at this time? Al-Shabab controls most areas. I am from Jilib town and they are the ones controlling it. Should I surrender to them and let them do anything they like? That will not happen.” Father-of-seven Ahmed Yussuf said Ruto’s threat was “unrealistic” and “can’t happen.” “Moving 400,000 people within three months is impossible,” he added. If forced returns did happen, “I fear for my children, especially my sons,” Yussuf said. “They will join either the government forces or al-Shabab. They will start killing people and their future will be devastated. I worked hard to make sure they study so that they help themselves and also move us out of this poverty. I am sure if we go back that bright future will not be there.” But for Abdi Abdulahi, who has lived in Dadaab since he was four, Ruto’s words made sense. “What the deputy president said is right. Enough is enough. Let us go back and build our country instead of begging for food. It’s time we farm or do business instead of waiting for 3 kilograms of maize for 15 days. “Refugee life is useless. For how long can we be called refugee? I have dreamt of going back for a long time but my parents would not let me. Now the time has come,” he told IRIN. Refugees International, an advocacy group based in Washington, told IRIN that if Ruto’s plan was translated into action, it would be illegal under international conventions as well as Kenya’s own constitution. (In January, Kenya’s high court ruled that elements of new security legislation which capped the number of refugees in Kenya at 150,000 violated the constitution. ) [caption id="attachment_17455" align="alignright" width="300"] 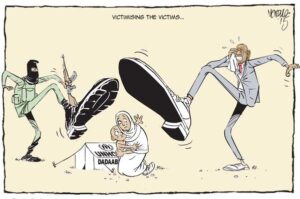 EDITORIAL CARTOON: The anti #refugees sentiments are fuelled by ignorance #Dadaab @UNHCR_Kenya via @ndula_victor .
The Star, Kenya[/caption] Senior Advocate Mark Yarnell said that although the lack of official communication could mean the deportation threat was not real, “it’s extremely worrying” to hear it from such a senior person as the deputy president. Previous calls for sending Somali refugees back have come from MPs. “It’s politically expedient to blame the refugee population and for the government to try to show they are doing something in response to the attack,” Yarnell said. The government, and especially top security officials, has been widely criticized for the many hours’ delay in deploying a crack anti-terrorist police unit to the scene of the shootings in Garissa. “What’s unfortunate is that a move like this only serves to reinforce xenophobic mentalities and further enforce divisions,” said Yarnell. Mindful of this danger, some Kenyan MPs have turned on Ruto for threatening to close Dadaab. The Parliamentary Caucus on Human Rights described the deputy president’s speech as an “an arbitrary roadside chest-thumping declaration” and said it should be rescinded. Previous backlashes After a spate of bombings attributed to al-Shabab last year, Kenyan authorities arrested thousands of ethnic Somalis and deported several dozen who were found to be in Kenya illegally. The actions of the police were roundly condemned by local and international human rights organisations. And in 2012, then president Mwai Kibaki cited the threat of insecurity to justify proposing closing Dadaab and repatriating the refugees there back to Somalia. *Source IRIN]]>