Washington, DC, April 17, 2015 – High honours were given to African Development Bank Group (AfDB) President Donald Kaberuka on Thursday, April 16 in Washington for his work to end extreme poverty on the continent during his 10-year career as head of the Bank. [caption id="attachment_17567" align="alignleft" width="300"] 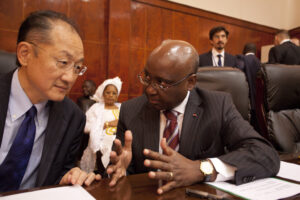 World Bank Group President, Jim Yong Kim talks with President of the African Development Bank Group Dr. Donald Kaberuka[/caption] World Bank Group President Jim Kim hosted a ceremony for Kaberuka in the atrium of the World Bank’s Washington, DC headquarters. There, he told a crowd of major players from the world’s economic and political stage that Kaberuka’s dedication to infrastructure development in Africa helped pave a way forward for the continent’s 54 countries. Kim thanked him for his service to the AfDB and the people who rely on it. Five Presidents joined Kim in showing their appreciation, including President Ellen Johnson Sirleaf of Liberia, President Ernest Bai Koroma of Sierra Leone and President Alpha Condé of Guinea. “Truly some people are hard acts to follow and he is one of them,” Condé said of Kaberuka. “He has lifted the AfDB very high and it is our hope,” he added, “that African countries will be responsible enough to find a successor who will maintain the level that he has reached.” Sirleaf reflected on Kaberuka’s tireless work during the Ebola crisis and recalled that he was not afraid to come to the affected countries to see what needed to be done to help. Karoma called Kaberuka “a great son of Africa.” He went on to say it is Kaberuka’s vision for the AfDB that has spurred extensive growth in terms of the Bank’s size and activity. “We will remember him for many things, but most importantly for his emphasis on infrastructure,” Karoma said. “We are indeed very grateful to him because we know the impact was great on our economies.” Boosting economies and putting an end to extreme poverty by 2030 is the focus of this year’s World Bank-International Monetary Fund Annual Spring Meetings. “The world had had great successes in the last 25 years in lifting people out of poverty, an astounding two-thirds reduction in the percentage,” Kim said. “Today, fewer than 1 billion people living in extreme poverty, and we must now reexamine our strategies to lift the final billion out of poverty and into the modern world.” Strategizing to fight against poverty is something Kaberuka knows a lot about. Before joining the AfDB he served as Minister of Finance in Rwanda where he oversaw the country’s successful reconstruction following its brutal civil war. At the helm of the AfDB, Kaberuka set infrastructure development as a top priority, a topic he has talked a lot about this week. Earlier in the day, Kaberuka delivered a keynote address at the Woodrow Wilson Center, a Washington, DC think tank, where he talked about boosting trade investment and development in Africa while reducing poverty. To do that he says he has focused the bulk of the Bank’s work on three crucial tasks:

Though Kaberuka has led the mission, he says it was not without the help of all the men and women who work tirelessly at the AfDB to make his vision a reality. To all of them he said “thank you for your service.” *AFDB  ]]>