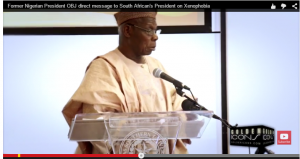 “If I were president Zuma in South Africa, the issue [of xenophobia] would not have arisen,” said former president Olusegun Obasanjo, to tumultuous applause from the impressed crowd. “First, I would condemn the action in very stern language. “Secondly, those who have made comments that seem to be glorifying the very bad act, no matter how close they have been to me, I would publicly castigate them, “Thirdly, I would make an example of a few of those who committed the act. And I mean that. Look – South Africa is one of the most developed countries is in South Africa and will continue to be a leader in Africa. If they cannot accommodate other Africans on their soil, then they don’t deserve to be leaders.” Watch video below:     https://www.youtube.com/watch?v=EOI9d6kDZzo *Source Nigeriana]]>