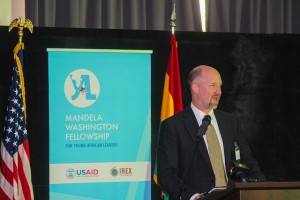 Christopher Runyan addressing YALI Fellows[/caption] Launched in 2010, the Young Africa Leaders Initiative may turn out to be one of the most significant legacies of the Obama Administration for Africa.Christopher Runyan,Senior Coordinator, President’s Young African Leaders Initiative at the USAID Bureau for Africa, and Sarah King from the Department of State Bureau for Educational and Cultural Affairs say the program has so far exceeded expectations . In a phone interview with Ajong Mbapndah L for PAV, both officials touted the success of the program and the positive impact it has had on the capacity of youth to be at the forefront of development in Africa. In a continent where approximately 60 percent of the population is below 35, YALI according to a White House Fact Sheet, sorts “to support young African leaders as they spur growth and prosperity, strengthen democratic governance, and enhance peace and security across Africa.” In order to broaden the participation of more young people, Christopher Runyan indicated that four regional centers will be opened in Nairobi, Kenya, Dakar, Senegal, Pretoria, South Africa, and Accra, Ghana. About two or three are expected to go operational in Summer and the rest in the Fall, he said. https://soundcloud.com/multimedia-podcast/interview-with-obama-administration-officials-on-yali-and-the-mandela-washington-fellowship-program   On the Mandela Washington Fellowship for Young African Leaders which brings 500 dynamic young African leaders, ages 25-35, from across the continent to the United States for 6 weeks of leadership training and mentoring, Sarah King said the focus is on people with the passion, zeal and energy to engage in programs which make an impact in their communities. Both Officials were full of praise for the dynamism displayed by the Young Africans who have participated in the program so far. “There are dynamic, entrepreneurial, energetic and do not take no for an answer,” said Christopher Runyan as he looks forward to meeting the next class. “I see in them the promise of a lot of change, opportunity and new things,” said Runyan . “The question should actually be how far there have exceeded our expectations,” says Sarah King as she lauds the importance of the program for both Africa and the US. Considering its success and the growing bonds of partnership between the USA and Africa, both Officials were optimistic that the advent of a new Administration in 2016 will not have adverse effects on the fortunes of a Program which is making its mark. At the last USA – Africa Leaders Forum, one of the Fellows, Takunda Chingonzoh from Zimbabwe achieved the feat of doing an interview with President Obama in front of a parked audience of U.S and African political and business leaders.   https://www.youtube.com/watch?v=CYNv52kmwvU Meanwhile in Accra, Ghana, over 150 young leaders from 21 West African countries will be meeting to brainstorm on issues considered critical for the future of the continent.The forum which will run from April 26-28, is in support of President Obama’s YALI and is organized by USAID and IREX. According to release from USAID, the diverse group of Fellows which includes, lawyers, doctors, youth activists, human rights activists, and social entrepreneurs will highlight issues for the promotion of entrepreneurship, growth, inclusive development, energy, women and philanthropy in Africa. The release also said that Fellows will  be joined by private sector leaders, U.S Government Officials and international and local organizations.]]>