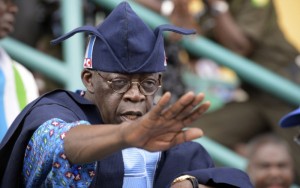 Pius Utomi Ekpei/AFP/Getty Images[/caption] General Muhammed Buhari’s political partner is a former bagman for two heroin traffickers. But that’s just business as usual in Nigeria.
Nigeria’s election last month was celebrated as an unlikely victory for democracy in an African country with a tenuous record of free and fair representation. But the man most responsible for midwifing General Muhammed Buhari’s ballot triumph over current President Goodluck Jonathan has a spotty CV. Former Lagos provincial governor Bola Tinubu, affectionately nicknamed the Jagaban, is today seen as a shrewd if not “deeply Machiavellian” Svengali in Nigeria’s politics as well as the architect of a hugely successful anti-corruption platform. But 20 years ago he had to forfeit nearly half a million dollars to the U.S. Treasury Department after being named as an accomplice in a white heroin-trafficking and money-laundering ring that stretched from West Africa to the U.S. Midwest. Although his case has been bandied about the Nigerian press for years, Tinubu’s involvement in a federal drug and racketeering investigation waged jointly by the DEA, FBI, and IRS has gone unreported elsewhere, even after his ascendance to Karl Rove-like status last month. A recent gauzy Financial Times profile of him, for instance, neglected to mention that two decades ago Tinubu was identified as a bagman for two Nigerian heroin movers who operated out of Chicago and Hammond, Indiana. They were Adegboyega Mueez Akande and Abiodun Agbele, Akande’s nephew, who was exposed to law enforcement after selling white heroin first to Lee Andrew Edwards, another dealer later jailed for trying to murder a federal agent, and then to an undercover cop. In a 1993 court docket from the U.S. District Court in the Northern District of Illinois, which The Daily Beast obtained from Sahara Reporters, a Nigeria-focused news outlet, IRS Special Agent Kevin Moss said that Akande had run the white heroin ring in the late 1980s until 1990, when he handed off the U.S arm of the business to his nephew, who had arrived in 1988. Akande then returned to Nigeria but continued to oversee the operation from abroad with the help of others at home and in the United States, including his relatives. One of the individuals identified in his cartel by Moss was Tinubu, then a Chicago State University-educated accountant working as a treasurer for Mobil Oil Nigeria Ltd, a subsidiary of energy giant Mobil Oil, which was still a few years shy of its famous merger with Exxon in 1999. In the biography section of his official website, Tinubu is described as having emigrated to the United States in 1975 “in search of the proverbial Golden Fleece with a heart brimming with unrelenting determination to achieve his visions.” This is certainly one way to describe his tenure stateside. In 1989, Moss said in an affidavit, Tinubu established an individual money market account, into which he deposited $1,000 in traveler’s checks, and a negotiable order of withdrawal account (NOW) at First Heritage Bank in Country Club Hills, Illinois. The address Tinubu gave the bank was the same as the listed headquarters of Globe-Link International, the front company owned by Akande and his relatives. Bank employees told Moss that Akande had personally introduced them to Tinubu in December 1989 when who also opened a joint checking account with his wife, Oluremi Tinubu, who already kept a joint account with Akande’s wife at First Heritage. Five days after the NOW account was opened, $80,000 was wired into it from a bank in Houston maintained by one of Akande’s relatives. Tinubu would later use the NOW account to buy a $10,000 Certificate of Deposit for an $8,000 car loan, listing Akande as his cousin on the application. At the time, Tinubu’s take home as a Mobil Oil Nigeria executive was a mere $2,400 a month and he claimed not to have any other revenue streams. Yet he still managed to deposit $661,000 into his individual money market account in 1990 and then another $1,216,500 a year later. He also opened more accounts with Citibank in its worldwide personal banking unit, transferring over half a million dollars from his First Heritage money market account into one of them in early 1991. Mobil Oil Nigeria told Moss that Tinubu’s role at the company never involved transferring large sums of money between banks and that it didn’t keep deposits in any institutions in the south suburbs of Chicago, where First Heritage was based. Moreover, although Tinubu moved back to Nigeria in 1983, he neglected to file U.S. income tax returns after 1984 despite having sizable, interest-generating deposits in American banks. All of this was enough to persuade a magistrate judge of the Northern District to issue seizure warrants for Tinubu’s First Heritage and Citibank accounts. Collectively, more than $1.4 million belonging to the Nigerian was confiscated. Tinubu gave differing accounts for his wealth to Moss. In one phone call from Nigeria, shortly after the U.S. Treasury seized his money, he admitted to wiring $100,000 to Akande’s Houston bank account and to receiving the $80,000 from Akande into his First Heritage account. Tinubu also said that apart from one other account in Fairfax, Virginia, he had no other money stashed in U.S. banks. [caption id="attachment_17786" align="alignright" width="300"] 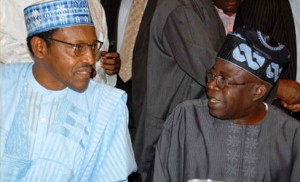 Buhari with Tinubu[/caption] Except that there were other accounts. Citibank has a worldwide banking division known as Citibank International where Tinubu stashed an additional $550,000. He also controlled an entity called Compass Finance and Investments Company Ltd., of which Akande and Agbele were directors. Still another nexus of money transfers was uncovered by federal investigators, with cash moving from First Heritage to Citibank to Citibank International, where it wound up in Tinubu’s personal accounts and in those belonging to Compass Finance and Investments. In a follow-up exchange with law enforcement officers, Tinubu changed his story. Just days after conceding that he’d sent and received money to and from Akande, he insisted that he had no financial or business dealings with Akande or Agbele. There’s no evidence that Tinubu was ever indicted for any crime. He eventually settled with the district court, turning over $460,000 of the seized $1.4 million, with the remainder released back to him. The Beast tried repeatedly to contact Marsha McClellan, the U.S. attorney who prosecuted the case, but was unsuccessful. “I’m not surprised at all,” said Virginia Comolli, a specialist on Nigeria and author of Boko Haram: Nigeria’s Islamist Insurgency. “There’s a trend of various Nigerian politicians at the highest levels involved in dodgy business deals around the world, in property and cash. Even ones who seem fairly clean turn out to have some dark histories.” The perfect case in point is Tinubu’s political project and new president-elect of Nigeria, General Muhammed Buhari, who in 1983 helped overthrow a democratically elected government in a military coup d’etat on the grounds that the government was undisciplined and corrupt. “He resorted to brutal methods, beating up people for not queuing properly and imposing limitations on the media,” Comolli said. “I think a lot of the votes Buhari got were anti-Jonathan rather than pro-Buhari.” But no doubt, many also came from a savvy fusion of political factions. In February 2013, Tinubu successfully merged his own influential Action Congress party with Buhari’s Congress for Progressive Change, resulting in the All Progressives Congress. The marriage united Nigeria’s most populous northwest and southwest regions and the ensuing campaign was billed by Tinubu as a “commonsense revolution” against a corrupt and venal incumbency which, in its five years in power, had seen the terrorist group and newly-minted ISIS affiliate Boko Haram thrive. Buhari swept the election with 2.7 million more votes than Jonathan. Even before that trouncing, however, Tinubu had a relatively positive reputation in Nigeria, according to former U.S. ambassador to Nigeria John Campbell. “He is widely regarded as having been a highly successful governor of Lagos state,” he said. “Together with Tinubu’s handpicked successor, Babatunde Fashola, Lagos has seen dramatic improvements in everything from practical stuff like garbage collection to the collection of taxes and the provision of public services,” Campbell told The Beast. Though even here, the ex-diplomat admits, Tinubu’s good governance has been clouded by controversy. “He established a company to do the tax collecting in return for a cut and, at one point, Tinubu and Fashola appeared to be splitting over the percentage of Tinubu’s cut.” Drug charges do indeed appear to be the sine qua non for Nigerian high office. The year 1993, when Tinubu’s assets were seized, was a turbulent period for Nigeria following the cancellation of a national election and the establishment of a military dictatorship. Moshood Abiola, the rightful winner of that election, was accused of narcotics trafficking according to Campbell. So too is “Prince” Buruji Kashamu from the People’s Democratic Party, who has faced extradition back to the United States since 1998. Kashamu was indicted by a federal grand jury in Chicago for being the elusive “Alaji,” a globetrotting drug kingpin who smuggled heroin into O’Hare International Airport from Europe and Asia. Piper Kerman, the memoirist who inspired the Netflix series Orange is the New Black, famously worked for Alaji. Kashamu denies the charges and insists that he was purportedly a counterterrorism informant to the U.S. government before and after 9/11, and that the real trafficker was his now-deceased brother. Despite his party’s general loss to the All Progressives Congress, Kashumu was elected in March as senator of the southwest Ogun state. In what appeared to be a magnanimous gesture to the winner, he took out an advertisement praising Tinubu as a role model. The Jagaban was distinctly unimpressed. He trashed the comparison in a statement signed by his media adviser, claiming that for Kashamu “to liken himself to Bola Tinubu is for a small rut to call itself a mountain.” Tinubu instructed the “false praise singer” to go face the music in the Windy City before deigning to talk to him. *Source Daily Beast
]]>