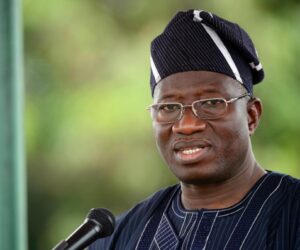 The outgoing leader said in a statement he wanted the UN to focus instead on helping to rebuild communities and assist those affected by the six-year Islamist insurgency.

Jonathan made the remarks after meeting with the special representatives of the UN secretary-general for west and central Africa, Mohammed Ibn Chambas and Abdoulaye Bathily, the statement said.

Jonathan said that with the support of troops from Chad, Niger and Cameroon, the Nigerian military had in recent months regained most of the towns and villages seized by the Islamist militants in the northeastern states of Borno, Adamawa and Yobe.

The Nigerian military has “commenced a final push to take the last stronghold of the insurgents in Sambisa Forest” in Borno state, the statement quoted him as saying.

It is believed that most of the 219 schoolgirls abducted by Boko Haram from Chibok in Borno state a year ago are being held in the forest.

Chambas, a former head of west African regional bloc ECOWAS, told Jonathan that the UN team was visiting the countries affected by the Boko Haram insurgency, which also includes Chad, Cameroon and Niger.

He reaffirmed the UN’s readiness to support the ongoing efforts by Nigeria and its neighbours to end the insurgency.