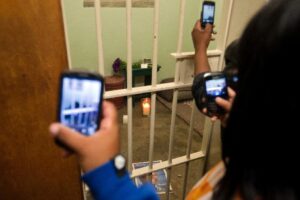 Johannesburg (AFP) – A phone app tracing the footsteps of Nelson Mandela was launched Wednesday in South Africa to encourage tourists to explore his life story, 25 years after his release from prison.

Users can use the tool to plan their travels around major sites associated with the liberation icon, including Robben Island, the prison off Cape Town where he spent 18 years of his 27-year jail term, and Qunu, his childhood home and burial place.

The GPS-enabled app, which is named ‘Madiba’s Journey’ after Madela’s clan name, was designed by South African Tourism and the Nelson Mandela Foundation.

“This app makes ‘walking in the footsteps of Madiba’ much easier than before and greatly enriches visitors’ experiences of the attractions associated with one of the greatest men of our time,” said Minister of Tourism Derek Hanekom.

Mandela was released from prison in 1990 and led negotiations that paved the way for the country’s first democratic elections. He was president between 1994 and 1999.